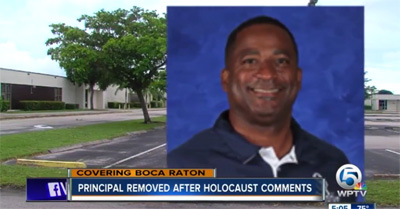 (JTA) — A high school in Boca Raton, Florida, removed a principal who told a parent that he needed to remain neutral on whether or not the Holocaust occurred.

The Palm Beach County School District said in a statement Monday that it was aware of remarks made by William Latson in 2018 and had instructed him to expand Holocaust curriculum at Spanish River Community High School and spend time at the United States Holocaust Memorial Museum.

“Despite these efforts, his leadership has become a major distraction for the school community. It is, therefore, in the best interest of students and the larger school community to reassign Mr. Latson to a District position,” the school district said in a statement on Monday.

In an email exchange a year ago, in response to a parent who asked how the Holocaust is being taught at the public school, Latson responded that “I can’t say the Holocaust is a factual, historical event because I am not in the position to do so as a school district employee.”

Latson’s comments drew wide media coverage after The Palm Beach Post reported on them on Friday.

The school, which has about 2,500 students, is said to have one of the largest Jewish student populations in the county, according to the report.

Latson, who had his job since 2011, apologized in a statement to the Post, saying his email “did not accurately reflect my professional and personal commitment to educating all students about the atrocities of the Holocaust.”