(JTA) — Joe Biden told a member of the IfNotNow Jewish anti-occupation movement that the “occupation is a human rights crisis” and called for a two-state solution.

The activists confronted the former vice president and two other Democratic presidential candidates, Pete Buttigieg and Cory Booker, on camera in New Hampshire over the weekend about the situation in the West Bank.

At a campaign event Friday in Dover, Elias Newsman of IfNotNow asked Biden, the front-runner in the race, if he would pressure Israel to end the occupation should he win the presidency.

Biden first responded that “I think the settlements are unnecessary” and added that “the only answer is a two-state solution No. 1, No. 2 the Palestinians have to step up, too, and be prepared to stop the hate that has caused, so it’s a two-way street.” 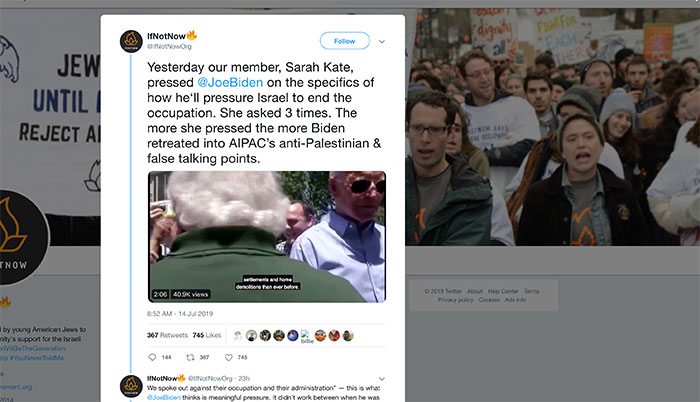 When Biden was asked if he would “pressure Israel to end the occupation as president,” he responded: “The answer, do you know anything about my record?” When Newman responded in the affirmative, Biden said “then you know I have, well you know I have …”

Newman said in a statement that Biden has taken “a step in the right direction by calling Israel’s military occupation a “real” and “significant problem”; this is the bare minimum we should expect from Democratic hopefuls.”

He said that Biden, as vice president under Barack Obama, “played a key role in giving the Netanyahu government a free pass to continue settlement expansion, launch assaults on Gaza that killed thousands of Palestinian civilians, and lay the groundwork to annex the West Bank.”

Buttigieg on Friday in Laconia, told IfNotNow’s Erin Sandler that “The occupation must end.” The mayor of South Bend, Indiana, added that there is starting to be an “awareness that in the same way that you can be pro-America without that meaning you got to support our president, you can care about Israel’s future and believe in the U.S. relationship and alliance with Israel without being on board with right-wing policies by the Netanyahu government, which is now walking away from peace in a way that I think will harm the Israeli people, the Palestinian people and in the long run the American people.”

In a tweet posted Sunday, IfNotNow said one of its fellows on Saturday asked Booker the same occupation question and that he got “visibly frustrated.”

“If that’s your issue, I would understand if you want to support somebody else,” the group said the U.S. senator from New Jersey responded. The series of tweets also noted that he refused to use the term occupation.

The group, which does not take a position on whether Israel should exist as a Jewish state, announced last month that it hired six full-time fellows to live in New Hampshire and spend the summer publicly confronting candidates during their events.

The group has raised its profile over the last year by protesting Birthright Israel in various ways, including walking off its free 10-day trips to Israel.