Remembering Summers and Honeymoons in the Mountains

As a Monticello native with deep nostalgia for the Catskills, I was especially eager to receive your reminiscences of time spent in the mountains. Astoundingly, more than 80 readers sent me stories—in some cases, completed novels—of honeymoons, childhood summers spent in kuchaleyns, jobs as babysitters and waiters at the big resorts, pit stops at the Red Apple Rest and celebrity sightings that included Jackie Mason, Bobby Darin and Jerry Lewis, among others. The anecdotes I include here are just a sampling. And let’s take heart: Our children and grandchildren are beginning to remake the region to appeal to new generations of young Jews, as reported by Hilary Danailova in her feature, Young Jews Are Bringing the Catskills Back to Life. And don’t miss our interview with Grossinger’s heiress Elaine Grossinger Etess and the travel report The Allure of the Catskill Region for the Jewish Traveler. —Marlene Post

Young college students would look for summer jobs as waiters, busboys and counselors to make extra money to pay for their education. At Grossinger’s, Lou Goldstein, the social director who was famous for his Simon Says audience participation game, liked to make this joke: “Remember to tip the waiters well; one of these days they could be your surgeon, and you’re under the knife and he could remember you…. ‘Oh yeah, I remember Mrs. Goldstein, I waited on her at Grossinger’s.’ ”

For a Jewish girl from Brooklyn of modest means, my years as a dance instructor at Grossinger’s were some of the most fabulous times of my life. The bellhops took my clothes to the cleaners; the maid made my bed; and I ate in the staff dining room. I saw all the great entertainment and had use of the swimming pool, ski slopes, ice skating, lake, etc.—and they paid me! Today, as a motivational speaker, I often share memories of those summers with audiences, and invariably people approach me afterward and say, “My husband and I used to go there!” or “I met my second husband there.”

My family rented a bungalow every summer, first at Dr. Locker’s in Mountain Dale in the early 1950s, then at Kassack’s Bungalows in Woodbourne. I have an August birthday, and I think all my parties were held at the picnic table outside our bungalow with my summer friends.

In 1960, our family purchased a summer home at Lake Louise Marie in Rock Hill, about 15 minutes east of Monticello. The hotels came into the picture for my family once we had the house. During the 1960s, we usually spent Passover in the Catskills, where we attended seders and dinners at a hotel (different years at Kutsher’s, the Pines, the Raleigh and the Concord), making use of the facilities during the day but sleeping at our own house.

My mother sold the house in the mid-1980’s, but my husband, children and I still return to the Catskills annually for a reunion of my maternal grandmother’s family. Over the years we stayed at the Nevele, the Fallsview, Kutsher’s and the Concord. Today, we have moved to the “Italian” Catskills—Villa Roma in Callicoon—but it’s not the same!

At the Pine Hill Bungalow Colony in Accord, N.Y., in the 1950s, Friday night was called “Daddy night.” All the fathers arrived, having made their arduous weekly pilgrimage out of New York City. On those nights, the ambient country air would dramatically change into a polyglot of swirling aromas emanating from tiny bungalow kitchens, smelling like the halls and stairwells of a Brooklyn apartment house. The familiar scents of chicken soup simmering, onions frying and kugel baking all tantalizingly intermingled in the night air. Friday nights would be a celebration of food, homecoming and Shabbat.

We honeymooned at Kutsher’s in late October 1968, staying in Fairways Lodge East on the golf course, with the autumn leaves falling around us as we wrote our thank you notes on the deck. When we ordered dinner, the waitress enumerated all the desserts, and my new husband simply said, “Yes,” and she brought him all of them. We hiked during the day, played shuffle board, swam indoors, played pool, rode horses at the Concord and ate delicious meals before dancing to an orchestra in the evening and enjoying Jewish humor shows. It was a memorable start to our wonderful marriage of 50-plus years!

What a joy for a city girl from Brooklyn to spend a week with a girlfriend at White Roe Lake Hotel in Livingston Manor. Swimming, sun bathing, shows in the casino and, of course, meeting boys!

Every summer we tried a different hotel: Swan Lake, Fallsview, Fairmont, etc. As I got older and had my own family, we went to the Granit. I remember the owner would go into the children’s dining room to make sure the screaming children would eat. The waiters had nerves of steel! At all of these hotels, you had a special outfit for each activity. For morning activities, you wore a playsuit; for swimming, you changed into a bathing suit; for dinner, a dress or suit. After dinner, you were more formal for the nightclub—women wore gowns. If you stayed up for the late show, it meant changing back to something more casual.

If you volunteered to work at my synagogue’s bazaar fundraiser, your family was entitled to a special discount at Hotel Gibber. From there, we would go to the Concord hotel to see their shows. I remember hearing Mal Z. Lawrence tell his joke about Pia Zadora in the role of Anne Frank: She was so bad that when the Nazis came for her, the audience shouted, “She’s in the attic.” The Concord had knockers on the tables in the nightclub, so if you liked the show you would bang on the table. Clapping was too much of an effort!

The Catskills served a much-needed respite from city life, and my children still talk about the good times they had. All I can say is “Vos iz geven iz geven.”

Back in the 1980s, I chaired one of Hadassah Jericho’s annual winter weekends at the Concord Hotel. The weekend grew from small beginnings to become a major event for the Nassau region, which included seven Long Island, N.Y., chapters.

We had a great relationship with the hotel management and were able to have our own tennis tournaments and ski races. In addition, we hosted spectacular cocktail parties with our own DJ’s. The hotel helped decorate the room beautifully and kindly accommodated the entertainment without charging for a room.

It was a fantastic era, enjoyed by both the children and adults. My children’s only regret is that their kids are unable to experience the Concord.

My family went to the Catskills every summer from Brooklyn to escape the heat. I was born in 1933; my memories of the Catskills begin when I learned to play mah jongg when I was 8. My mother rented a cabin, which we shared with another family. Every day we went blue berry picking, eating as we picked. My mother took the berries home and canned them. Little did I know that we were going to have blueberries and sour cream at least three times a week during the winter.

When I was 15, I wrote to a number of hotels in the Catskills seeking a governess position. I lied about my age and was hired by a hotel near Kauneaga lake. I then became a tea girl at the Golden Hotel and later a waitress at the Concord, Grossinger’s, Paul’s and a few others. One summer, I worked as a photographer at various hotels, which explains a photo I have of Jerry Lewis playing baseball—I am the girl in the photograph taking his picture.
Joyce Bloom
Los Alamitos, Calif. 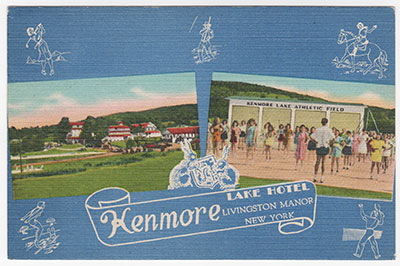 My father, Jack Muravchick, and his family developed and owned the Kenmore Lake Hotel in Livingston Manor, the last stop on Route 17. My family started the business as a farmhouse in the 1920s and later expanded to accommodate 500 guests. It had a main house and four other guest buildings, plus a casino, a lake, swimming pool and athletic courts. The Kenmore catered to a young crowd. Red Buttons, Sophie Tucker and other celebrities entertained on the weekends, plus there was a band and dancing. I remember various entertainers fundraising for bonds during World War II. My grandfather, Solomon Muravchick, my father and two of his brothers operated the hotel. My father ran the office and greeted guests; Uncle Abe ran the kitchen and dining room; and Aunt Gertie helped in the kitchen. Uncle Harry was in charge of maintenance. Grandpa Solomon mainly watched over the cash register in the office. I was born in March 1934, and spent my first 12 summers at the Kenmore, until the hotel was sold after World War II at a handsome profit for that time.