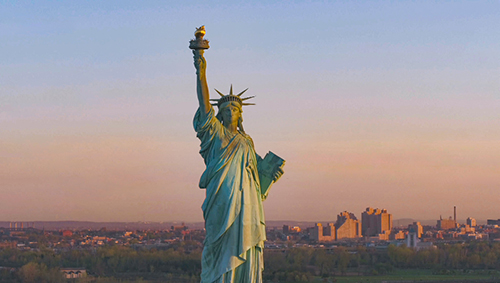 Diane von Furstenberg’s mom told her she survived Auschwitz “so I could give you life. And by giving you life, you gave me my life back. You are my torch of freedom.”

It’s one of several anecdotes from von Furstenberg in Liberty: Mother of Exiles, an HBO documentary about the Statue of Liberty premiering on October 24 and available on streaming platforms.

The noted fashion designer has been called the “godmother” of the statue because of her efforts to create the new Statue of Liberty Museum on Liberty Island, which opened in May. She is at the center of the film, speaking to visitors about their connection to the iconic statue and traveling to other countries to uncover the statue’s history. She visits Paris to talk to descendants of Eduard de Laboulaye, a French abolitionist who first suggested the idea of a statue, and Colmar, France, where she tours the home of the statue’s sculptor, Frédéric Auguste Bartholdi.

In Colmar, she finds that “Liberty Enlightening the World” (Bartholdi’s name for the statue) was likely based on a model he created for a figure meant to stand at the mouth of the newly built Suez Canal. That proposal didn’t work out, but he salvaged the basic concept.

But it isn’t facts, fascinating as they are, that shines in this film. It is the look in people’s eyes when they gaze at the Lady Liberty. “She is like the sun,” von Furstenberg says. “She warms everyone at once.”