The campaign, launched Wednesday by the city’s Commission on Human Rights, consists of four ads each featuring a photograph of a different Jewish New Yorker and a bold proclamation: “Jewish New Yorkers belong here. Anti-Semitism does not.” 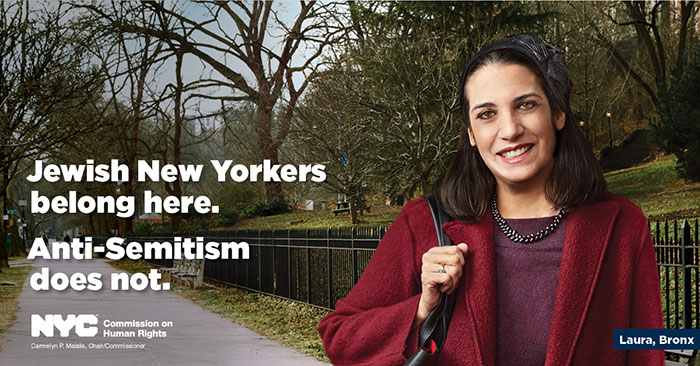 The ads will appear online and in three Orthodox publications — Hamodia, Jewish Press and Mishpacha Magazine — but feature Jews from diverse backgrounds.

“I think it’s undisputed right now that Jewish communities, both those who are visibly Jewish and those who are not, are feeling particularly vulnerable and are looking for allies, for solidarity, for support and we hope that this campaign addresses some of those concerns and that fear,” said Dana Sussman, a deputy commissioner who helped develop the campaign.

Sussman appears in one of the ads. The other New Yorkers featured are Yosef Rapaport, a Hasidic Brooklyn resident and community activist; Laura Shaw Frank, a Bronx resident and Orthodox feminist; and Marques Hollie, a Manhattan resident and queer Jew of color. 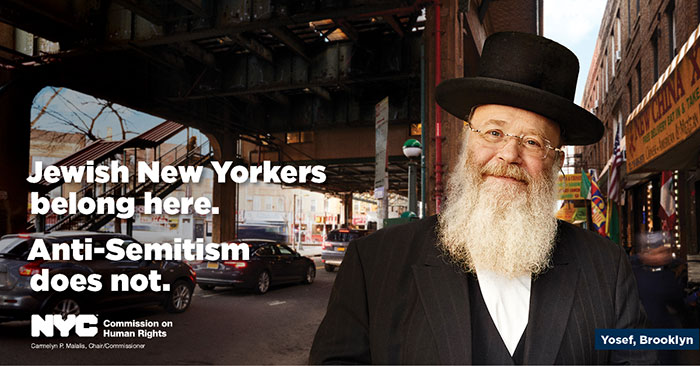 Rapaport said he had agreed to participate in the campaign after criticizing the city for excluding visibly Jewish New Yorkers from previous ads on other topics.

“I’m active on social media and I also sometimes rightfully or wrongfully complain when New York City has promotional material ads for all kinds of stuff, tourism and all, showing the diversity of people, [but] they hardly ever show Hasidic children, men or women,” he told the Jewish Telegraphic Agency in a voice message on the WhatsApp messaging platform. “Now that they asked me it was kind of difficult for me to say no.”

Rapaport said he hoped the campaign “will have the desired effect of making us visible, that we belong.”

In addition to running the ads in the three Orthodox publications, the commission will also promote the images on social media and in digital ads on the New York Jewish Week website. The campaign cost $50,000, city officials said.

The commission has run similar campaigns to combat racism, Islamophobia and discrimination against the LGBTQ community. The city is also responding to the recent spate of anti-Semitic incidents in other ways, including by launching an education campaign in schools and creating an Office for the Prevention of Hate Crimes. 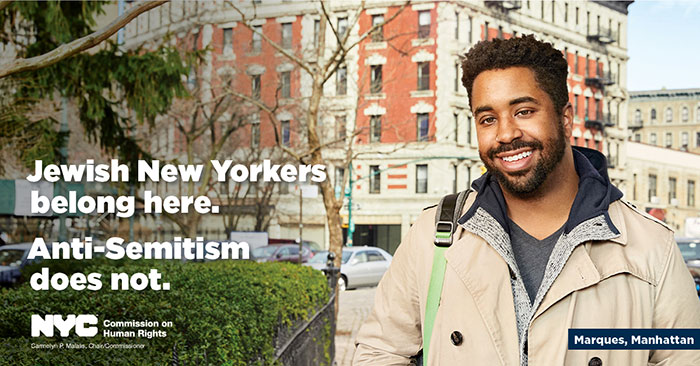 Hollie said he hoped the campaign would yield benefits even beyond combating anti-Semitism.

“The Jewish people are a racially and ethnically diverse group of people,” he said in an email. “My hope is that this campaign will not only remind the public about this, but also remind us that our community is multi-faceted and that we, collectively, are pillars of support for one another in times of joy as well as times of adversity.”