Letters to the Editor: Anti-Semitism, Activism and Advocacy

As a Hadassah life member, I always look forward to receiving Hadassah Magazine. But the July/August 2020 issue raises a profound question, 75 years after the Holocaust, as to whether mainstream Jewish organizations will call out the alarming increase in anti-Semitic and anti-Israel attacks, incendiary speech and murder of Jews.

This recent issue includes two prominent, full-page items—“Time for Moral Reimagining” and “Needed: A Sense of Urgency”—plus a cover headline about racial injustice, yet no word about vicious attacks against Jews. While racial injustice deserves discussion, why is it basketball legend Kareem Abdul- Jabbar, a non-Jew and African-American, who is the loud voice publicly raising this question about anti-Semitism: “Where’s the outrage?”

It’s more than an embarrassment, it’s dangerous, and of all people, we should know better.

We all recognize the ugliness of bias and racism, but, in my mind, the organization Black Lives Matter is doing more harm than good. Their basic charter includes some distinctively anti-Israel language, which translates to anti-Jewish sentiment. It is a tragedy that the movement, which has done so much good, has now moved away from its central mission and has declared war against the nation of the Jewish people.

Support goes both ways: How can we support Black Lives Matter when some of its supporters joined anti-Israel demonstrators in a nationwide Day of Rage that included calls for Israel’s destruction and claims that Israel murders children—an allusion to medieval anti-Semitic blood libels?

I am sickened at what’s happening in this country and scared of what’s to come.

I read with interest Hilary Danailova’s feature in the July/August issue, “White Dresses, Yellow Roses and Activism,” on the role of Jewish women in the fight for suffrage. I was particularly pleased to see my great aunt, Rachel Szold Jastrow, mentioned. The photograph below—taken in Madison, Wis., in 1915—is one of a dozen Szold photographs my mother mounted on a piece of yellow tag board, labelled and framed. It has hung in my house for over 40 years.

I have taken the right to vote seriously and have voted in every election in which I was eligible to do so. I have passed this duty on to my daughter, who also votes in every election. We owe those early women a debt of gratitude. 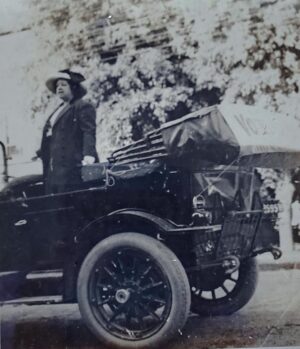 I would like to raise a number of issues regarding “Finding Her Voice,” the profile of transgender activist Abby Stein, in the July/August issue.

Hadassah Magazine has published several articles about women who have left Orthodox Judaism for either a secular form or a more liberal form. I have never seen an article about a secular woman becoming Orthodox.

And while Stein has a right to leave Orthodox Judaism and transform into a woman, she seems to show more respect for her Muslim friend than she does for her Hasidic relatives. A commitment to the halachic observance that she left behind ought to be respected. Indeed, one cannot leave a community, trash it together with other forms of Orthodox Judaism, demand educational reform and then expect family members

to be accepting. When one leaves a religious community, one should do so respectfully and advocate new views without trashing old communities.

Finally, if Stein were a voice against anti-Semitism, why was she part of the Women’s March, which featured leaders who were aligned with Louis Farrakhan? And was she vocal about gay pride parades that excluded Jewish symbols?

“Finding Her Voice” was one of the best articles I have read on transgender issues in some years. I found it to be honest and compelling. In my psychology practice, I specialized in LGBTQ+ issues, with a focus on transgender health. I feel very strongly that support and awareness of these realities is vital today in both the Jewish and non-Jewish communities. I thank Abby Stein, writer Rahel Musleah and Hadassah Magazine for featuring this beautiful and informative story.

In Praise of Cover Girls

Unlike letter writer Ilene Schneider, I love the May/June 2020 cover of Hadassah Magazine, highlighting the “Generation to Generation” feature. The colors are extraordinary. The fashion is hip. The body language between mom and daughter clearly shows their closeness. Perhaps the letter writer is more comfortable with the July/August cover depicting modestly dressed Jewish suffragists of the early 1900s.

Something for everyone, right? Keep up the good work.