As the cantor at Temple Beth Zion in Buffalo, N.Y., Penny Myers has used her voice to comfort and inspire her congregation for 14 years. Now, she wants to rouse women to raise their voices against sexual harassment.

Myers’ new mission was born out of personal experience. After several years of unsuccessful attempts to convince the synagogue’s lay leadership to resolve patterns of inappropriate behavior toward her and others by Rabbi Jonathan Freirich, Myers filed an ethical complaint with the Central Conference of American Rabbis, the Reform rabbinic organization.

The December 2019 complaint cited five specific allegations of inappropriate comments, including Freirich’s description of her as the “beautiful blond cantor,” a comment he made from the bimah during the weekend of his hiring interview in 2016. It also included a reference to “Fifty Shades of Cantor” after she returned from an overnight 20th-anniversary celebration with her husband in October 2018.

Since the time the complaint was filed, the CCAR has censured Freirich and the congregation’s leadership moved to end his contract early. But Myers, who is now on a paid leave of absence due to the emotional fallout, continues to reel not only from the rabbi’s actions but also from the way she contends the synagogue mishandled the situation.

“This is a pivotal time for my leadership to make teshuvah,” she told Hadassah Magazine in an exclusive interview. “Right now, I am working on undoing the psychological, emotional and spiritual damage of being a whistleblower and an upstander, rather than being a ‘good girl.’ ”

The CCAR’s censure of Freirich in March included a separate, earlier complaint filed by a Beth Zion family in June 2019 alleging that the rabbi had solicited inappropriate meetings with 12-year-girls outside the synagogue. The CCAR informed Beth Zion of its conclusions but imposed a “censure without publication,” meaning the rabbi and the congregation received the information about the censure but it was not to be made public on its website, and the CCAR urged the congregation to be “discrete [sic].”

In response to the CCAR censure, the board of the 750-member unit Reform congregation decided in August to end the rabbi’s contract early. But not until The Buffalo News contacted the synagogue president for comment in advance of its late October coverage of the situation did the president, David Goldberg, send an email to the full membership informing them of the rabbi’s early termination, without providing any reasoning. According to the terms of the deal negotiated, Freirich will continue in his role until the end of December 2020, six months before his contract was due to expire.

Myers, 46, a life member of Hadassah and Young Founder donor along with her husband, Dr. Bennett Myers, credits a Hadassah Magazine story in July 2019 for giving her the courage to speak up. That feature, “When Rabbis Say #MeToo,” ran as part of a special issue focused on “#MeToo and the Jewish World.” 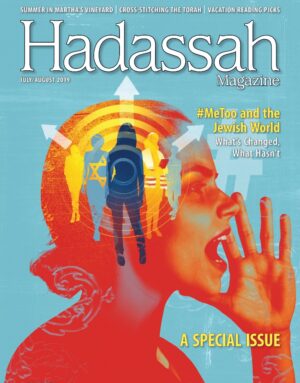 “I brought the magazine on vacation with me, and in the middle of what was happening to me, I read about women speaking out,” she said. “It empowered and emboldened me. I realized that I needed to take agency over myself and to be a much stronger self-advocate for what’s true, just and right. It changed the trajectory of my life. It sparked something in me. I just didn’t want to take it anymore.”

Myers said she “thought long and hard” before filing the ethical complaint with the CCAR. She said she had followed the synagogue’s sexual harassment policy that urges victims to report incidents and tried first to resolve the issues with the board directly. Though both the rabbi and the synagogue had hired attorneys, she said she was “shamed” for hiring her own lawyer and “leveling the playing field.” She said she was treated like a pariah and her access to board members was terminated.

Her attorney, Lindy Korn, also a Beth Zion member and a life member of Hadassah, said, “The cantor begged for transparency and complained about a hostile work environment which caused harm to her health. Somehow, protecting her wasn’t as important as protecting the rabbi.”

Goldberg, the synagogue president, told Hadassah Magazine that the synagogue leadership “did not, and would not, ignore allegations of inappropriate workplace behavior. Our senior lay leadership confronted the rabbi about his behavior immediately. We believed that he acted inappropriately but not in a malicious or predatory manner, and that he understood what he had done wrong.”

But an email Goldberg sent to a select group of people in September read, in part: “We have done an admirable job, up to now, of trying to run the temple, protect the rabbi, shield our congregants, pacify our cantor, put on our happy faces, and hide our dirty little secrets. I feel, at this time, that we may not be in a position to continue with the charade…., “ he wrote in the email. “The public may now soon know more than we have shared.”

Responding to questions about that email, Goldberg said that “the board has had a fine line to walk between respecting the privacy of our employees, following the recommendations of the CCAR and

communicating transparently with our congregation. At times, each of those fundamental commitments were at odds with each other.”

For his part, Freirich, the rabbi, told Hadassah Magazine: “I apologized for inappropriate comments and take responsibility for them. My punishment is serious, and I accepted it. I am working on what the CCAR and Temple Beth Zion set as my path to repentance and reconciliation,” the rabbi wrote in an email. “I regularly consult with CCAR officials who guide me in these efforts and follow to the letter what the CCAR requires in the process of my teshuvah.”

Myers said the bigger issue for her has become the way the synagogue leadership has handled the situation. “I want to make it clear that it’s not anymore about the rabbi,” she said. “Sadly, the leadership’s decision-making and preferential treatment to the male abuser greatly contributed to the damage inflicted on me—quite substantially more than the rabbi’s actions.”

Myers said she started experiencing anxiety attacks during services a year ago and required medication and therapy to deal with the emotional fallout. She took a paid leave of absence, offered to her if she signed a release that she would not litigate. “I never intended to litigate,” she said. “I just wanted equality and safety.”

Her future at the synagogue is uncertain. Her leave began after Yom Kippur and extends to January 1. Her contract is scheduled to end June 30, 2021. She said the board is bound by the contract to decide by December 1 whether to renew. Goldberg declined to comment on “HR issues which we would not discuss publicly.”

Myers said that despite the strains between her and the board, she is not yet giving up on her position.

“I don’t know what my next steps will be. I hope things will change after January 1,” when Freirich is gone. While she works on herself to “mend the damage” caused by the rabbi and the synagogue leadership, she said she hopes that the leadership acknowledges what has been done to her and “walks the path of teshuvah. Until then, I don’t know what any day will bring.”

In a November 2 letter to the editor of The Buffalo News, which, in addition to the news story, published an editorial sympathetic to Myers and called for transparency on such matters, congregant Joy Feldman expressed her outrage: “The two-year history of the temple leadership’s failure to adequately address Myers’ complain reeks of male privilege.”

The board, she wrote, “sought to `protect’ the rabbi and ‘pacify’ the cantor, the blameless, ethical professional who sought relief from sexual harassment. In doing so, they further harmed the cantor. The wrong-headedness of these intentions can only be understood as gender bias.”

To Myers, the problem runs deeper than one rabbi and one congregation. “As a culture—especially in synagogues—there is a hyper-masculine culture, and as I’ve experienced, there is gender bias, inequity and inequality. It’s not just my synagogue; it’s all over.

“When you don’t speak out the problem is passed on to another congregation,” continued Myers, who is active in the Conservative movement’s Cantors Assembly, mentors other cantors through her position on the assembly’s placement committee and is chair of the 75th anniversary convention slated to be held in 2022.

She will be speaking on the advantages and disadvantages of being a female clergy member on November 17 for the SheCAN Network, a global feminist organization.

The Talmud, said Myers, teaches that anyone who has the ability to protest the behavior of members of his household and doesn’t is liable (Shabbat 54b). “I did that and I was silenced. This past year has tested my faith, not in God, but in human beings, to do the right thing,” said Myers.

“Listen to the still small voice inside,” she said she encourages her three children, who are 19, 17 and 15, as well as others, to do. “The voice of God says something’s not right. We need to trust that voice.”

If you are a Jewish female clergy member who has experienced sexual harassment in the workplace,
please let us know. Your story matters.