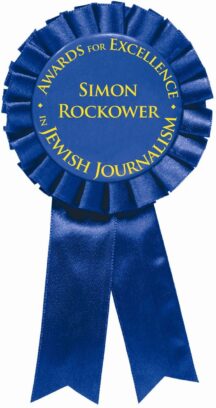 Hadassah Magazine has received 10 Simon Rockower Awards, the annual prizes for excellence in Jewish journalism handed out by the American Jewish Press Association (AJPA). The awards, for work published in 2020, were presented June 24 as part of the AJPA’s 40th annual conference, held this year virtually.

“I am thrilled that Hadassah Magazine has garnered so many Rockower Awards this year, most of which recognized the kinds of stories we do best: spotlighting women who, by standing up and speaking out, make a difference,” said Lisa Hostein, the magazine’s executive editor. “They are stories of clergy calling out sexual harassment and nurses working to heal the sick; of a mother still grappling with the trauma of infertility, a transgender woman finding her voice and activists fighting for women’s right to vote a century ago.”

Hadassah Magazine secured both first and second place awards in the category of Excellence in Personal Essay with “The Fourth Player,” about learning to play mah jongg, by Stacy Gallop; and “The Blessings and Trauma of IVF” by Talia Liben Yarmush, respectively.

Hilary Danailova won first place in the category of Excellence in North American Jewish History for her feature “White Dresses, Yellow Roses and Activism,” about the centennial of women winning the right to vote, with the judges noting that “The writer’s ability to make these extraordinary women leap off the pages of history illustrates how history can, sometimes for good, repeat itself. At a time so many people still have to fight for so many rights, never underestimate the power of women to change the world.” Danailova also earned an Honorable Mention in the category of Excellence in Writing About Women for “Hands-on Healing,” about the obstacles and achievements of Jewish nurses.

Hadassah Magazine also garnered both first and second place honors for Excellence in Covering Zionism, Aliyah and Israel, with “Groundbreaking Burial in Israel” by Uriel Heilman, which explores the unique challenges Israel faces in finding enough space to bury its dead, and “A Home for Life” by Wendy Elliman, which provides a poignant portrait of Israeli communities for people with disabilities.

Winning first place for Excellence in Writing About Food and Wine is another longtime magazine contributor, Esther Hecht, whose “Vintage Israel” was, as a judge noted, “truly well-researched and well-written story about Israel’s wine industry. I was impressed with the writer’s ability to pack in so much history without ever falling into tedium. I also loved the stories and details about the people behind the wines.”

And finally, Menachem Wecker won an Honorable Mention in the category of Excellence in Arts Reporting for “A Night at the Museum for All,” which explores how Jewish and Holocaust museums provide access to visitors with disabilities.

Hostein said she was particularly gratified by the awards for the stories from Israel. “Our diverse articles about the needs of people with disabilities, burial challenges and wineries are especially gratifying at a time when Israel is under fire from so many media outlets,” she said, adding: “These award-wining stories are the kind we will continue to pursue, stories that enlighten our readers and bring them the excellent journalism they deserve.”