The two paintings on prominent display are like sisters yanked apart by family misfortune, one orphaned here, the other there, with no direction home.

Henri Matisse created the lusciously hued “Girl in Yellow and Blue with Guitar” and the sensuous “Daisies” in the ominous year of 1939—the year the Nazis invaded Poland and the world convulsed. The paintings were housed together for a fleeting time in the collection of the noted French Jewish art dealer Paul Rosenberg, who fled Nazi-occupied Paris in 1940, leaving behind thousands of artworks. The two works were plundered by the Nazis, shipped off to the Louvre, then a Nazi storage depot for stolen art. “Girl in Yellow and Blue with Guitar” ended up in the hands of Hitler henchman Hermann Göring. After the war, the Matisses were recovered and returned to Rosenberg by the Allies. He sold the pieces, and they were shuttled through the art world in the hands of private collectors and somehow found each other again, more than six decades after the war, at the Art Institute of Chicago. The two paintings are survivors, of a kind. They have borne witness.

The backstory of these two paintings’ journeys—and how the weight of history bears on Nazi-looted works of art—forms the mandate of “Afterlives: Recovering the Lost Stories of Looted Art,” slated to run August 20 through January 9, 2022, at The Jewish Museum in Manhattan. If you have followed the legal and ethical twists and turns of looted art cases in the courts in recent years, the show can almost feel ripped from the headlines. (Stories like the one centering on Gustav Klimt’s portrait of Adele Bloch-Bauer, made into the 2015 film Woman in Gold, have proliferated of late.) The exhibit’s concept, employing the literary device of a narrative arc through time and space, is a daring one for a museum exhibition.

With 53 works of art, including some from the masters of Modernism, 80 Jewish ceremonial objects and a range of photographs and archival documents on loan from many leading cultural institutions, the show is a revelation. It shifts the focus from theft to recovery, and it places a special emphasis on the actual physical spaces through which the stolen art moved. Storage depots and collection points set up by the Allies in Munich and Offenbach that acted as way stations take on a moral weight, as do the men and women who cared for and cataloged them. “Afterlives” gives fresh meaning to the phrase “a sense of place,” place becoming synonymous with refuge and sanctuary.

The viewer, for example, sees a wall-size archival photo of “The Room of the Martyrs” in Paris, the former Jeu de Paume gallery used by the Nazi art-looting outfit to store 22,000 stolen “degenerate” works—and alongside it, miracle-like, three of the very paintings recovered from it.

The Jewish Museum’s own role as a depot for Judaica from devastated European synagogues, a story that has not been told until now, comes into sharp relief, as does the work of the organization Jewish Cultural Reconstruction, Inc., which collected and distributed heirless Jewish property in the United States and worked with The Jewish Museum in the process. 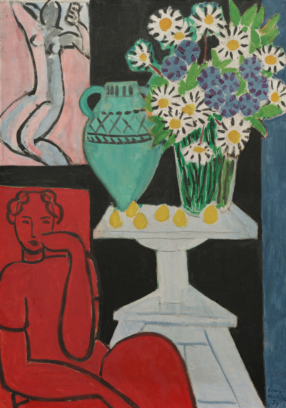 In the spirit of William Faulkner’s line about the South—“The past is never dead. It’s not even past.”—“Afterlives” brings the theft-and-recovery story arc into the present. Its curators, Darsie Alexander and Sam Sackeroff, commissioned four contemporary artists, Maria Eichhorn, Hadar Gad, Dor Guez and Lisa Oppenheim, to create works that reflect the themes of presence and absence raised by the exhibition.

Using archival photos showing sites where looted art was housed, Gad, for example, who lives in Israel, creates poignant paintings of stacks of yellowing books piled like discarded waste. Guez, whose family blends Christian Palestinian and Tunisian Jewish strands, weaves his background into objects and photographs that speak of memory and identity. Featured in his piece is a letter in an ancient Judeo-Arabic dialect—bearing a blue water-damage mark, like an abstract watercolor—written during his grandparents’ perilous journey from Nazi-occupied Tunisia to Israel.

In discussions about the exhibit, co-curator Alexander likes to talk about the “front of a painting” and the “back of a painting.” When viewers come upon “Girl in Yellow and Blue with Guitar” and “Daisies,” the front of the paintings, i.e., their dazzling sense of color and lyrical lines, will be strikingly apparent. What won’t be, and what “Afterlives” provides in both heartbreaking and redemptive ways, are their backstories, the history-tossed, harrowing journeys they took to end up, side by side, two sisters back together again on a museum wall in New York City.

Robert Goldblum is the former managing editor of The Jewish Week.