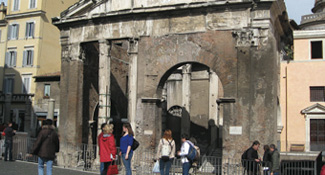 The Jewish Traveler: Rome
by Elin Schoen Brockman
When Sandra Moreschi opened the Saray Judaica shop in the Ghetto of Rome in 1992, the guidebooks hardly mentioned the old neighborhood. Now it is

The Dancers’ Kibbutz
by Leora Eren Frucht
Dance makes up a relatively small part of Kibbutz Ga'aton's income, but a significant part of its identity.

The 188th Crybaby Brigade
by Joel Chasnoff
For Joel (Yoel) Chasnoff, “a skinny Jewish kid from Chicago (as he is described in his book’s subtitle), joining the Israeli Army for one year

Start-Up Nation
Technology companies and global investors are beating a path to Israel and finding unique combinations of audacity, creativity, and drive everywhere they look. Which may

Season to Taste: Sweet-Talk
by Adeena Sussman
When it comes to the Rosh Hashana table, honey, in all its burnished-amber stickiness, tends to steal the spotlight. Tradition calls for honey as a

Profile: Caryl Stern
by Rahel Musleah
Caryl Stern heard two iconic stories growing up, one from her mother, the other from her grandfather. She learned that her mother had escaped Vienna

Medicine: Clinical Imaging, Courtesy of Hollywood
by Wendy Elliman
Click the mouse to bring a three-dimensional human figure onto the screen. Click again, and the figure rotates. Another click, and the skin melts off

Letters to the Editor: Israel’s Fashion Footwear and Prospects for Peace
A Side Trip I was hoping to find mention in “The Jewish Traveler: Zikhron Ya’akov” (June/July issue) of the Meir Shfeyah Youth Aliyah Village located
Page 1 of 3123NEXT PAGE »