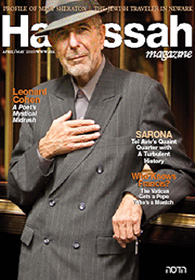 As a lifetime member, Hadassah Magazine has been in my home through many of its makeovers and adjustments. I am a former magazine executive and current editor of a temple bulletin—and have admired your attention to accuracy and style.

But what is with the spelling of mentch (cover and story in the April/May issue)? The accepted transliteration is mensch. I know that mentch is an obscure spelling, but from Isaac Bashevis Singer to Saul Bellow, it’s mensch.

Editor’s Note: When a word is transliterated from any language into another language, all the sounds of the original word must be reproduced. When the Yiddish word mentch (or mentsh) is transliterated, all the sounds have to appear, including the “t.” Additionally, many people mistake the Yiddish word for the German word mensch, which means person. But that German word is different than the Yiddish mentch, which means a decent human being.

Re-covering
I was surprised by the letters objecting to the February/March cover because it never occurred to me that anyone would find it offensive. What I remember is a warmly lit photograph of human bodies at their most beautiful. The cover was indeed arresting and attention-getting and, to me, most tasteful. To use one of the letter writer’s words, the cover illustrated “the sacred beauty of the human body.”

Not Comparable
It was mentchlekh of Jay Michaelson to write a complimentary profile of Pope Francis. However, comparing the role of a rabbi to the pope was faulty. They are not comparable.

The rabbi, unlike the pope, is not a spiritual advisor. Since Judaism does not compartmentalize our lives, there is no difference between the spiritual and the physical worlds. Halakha, the Jewish way of life, involves itself in all human activity, but must always be tempered with compassion and sensitivity.

Traditionally, the rabbi is a posek, a professor of the Jewish way to live. Today, few Jews seek halakhic advice, therefore few rabbis have strong Talmudic backgrounds. A scholarly rabbi should never answer questions in a vacuum. He must always live in the real world with concern for both the individual and the community. Even though halakha has defined principles, rulings are custom-made for the individual. Two people can approach the same rabbi with the identical question and receive opposing adjudication.

“The Enemy” brought back nightmares I had as a child in Vienna. I, too, witnessed funerals with horses with black plumes, the glass hearse where the coffin was visible and the crucifix. I was never physically threatened, but I was terrified. To this day—my family left Vienna in 1940 when I was 8—if I see black carriage lamps, which frequently are used on house porches and next to front doors, the image of the hearse with these same lights pops into my consciousness.

Thank you for the beautiful tribute to Leonard Cohen in the April/May issue . I have been reading his poetry and listening to his music for a long time. I attended his first United States concert in 1969 in Manchester, Connecticut. There were about 50 people there. He posed for pictures and signed autographs. He sang the famous songs from his first album and played in front of us on the floor, not on a stage. He was very low key and understated right from the beginning.