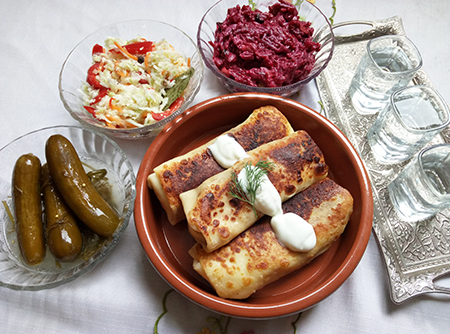 Picture this: tables set with platters of what look like chicken-flavored Jell-O molds (kholodets), sloppily poured vodka shots and red and white Santa hats; cheesy holiday song-and-dance performances blaring from nearby televisions. That, in a nutshell, is how Russian Israelis celebrate their most culturally distinctive holiday—Novy God.

It’s easy to write off Novy God (Russian New Year, which begins on January 1) as a bizarre and colorful ritual—far from anything that could be considered Jewish—but the fact remains that it is the No. 1 holiday for those who immigrated to Israel following the fall of the Soviet Union more than 25 years ago.

In that time, Israel has absorbed more than 1 million Jews from Russia and former Soviet republics such as Kazakhstan, Belarus and Georgia.

These Jews didn’t bring much with them—a few possessions, a strong work ethic and their culture and cuisine.

My husband, Eli, and his family were among the many new Russian immigrants who landed in Israel in January 1990, unsure about their new country, so radically different from Ukraine, their former home. It is through them that I learned about Russian food and culture.

Cabbage, potatoes, mushrooms, beets, pickles, sour cream, garlic, cherries and dill. These are the foods and flavors that have come to taste like home to me, and to my children as well. With that context, I see Novy God through my in-laws’ eyes.

It is understandable how this holiday could be misunderstood—there’s a lot of drinking and revelry. It can seem from the outside like a secular, Christmas-like holiday, no doubt because of the decorated tree and gifts handed down by Grandfather Frost. While most children of Russian immigrants have grown fully into Israelis, the older generations experienced a broken link when it came to Jewish customs, practices and holidays. Novy God was their major chag.

And so, all the holiday energy and good cheer was funneled into Novy God. It is one of few nights a year when Russians in Israel honor their unique cultural heritage with a heavy dose of nostalgia for the old country. Luckily, since Novy God is a feast of epic proportions, and I include recipes here for you to recreate some of these flavors at home (think cabbage, potatoes, pickles, blintzes—yum!).

These blintzes are coming to you straight from my mother-in-law, Galina’s, kitchen. They were among the first recipes I learned from her. Over the years, I have tried different recipes for blintz shells, but none has ever come out quite as well. To ensure success, make sure you start with a good frying pan that is not known to stick.

The filling is a combination of two of my favorites things—buttery potatoes and mushrooms.

Finished blintzes can be eaten as is, seared in a pan with hot oil or, for an American touch, topped with melted cheddar cheese. They can be eaten hot or at room temperature, but always with a dollop of sour cream on top.

Another Galina staple, her special touch is using sliced prunes to add a sweet complexity. The mayonnaise adds an almost butter-like finish here, while not inhibiting the Bordeaux-color of the cooked beets. 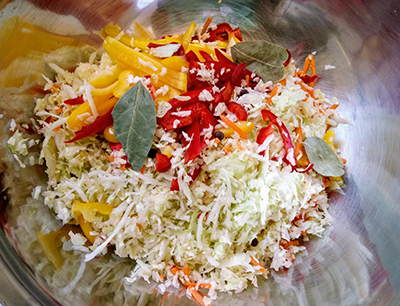 A cousin of German sauerkraut, Russian pickled cabbage is subtle and slightly sweet. With the addition of carrot and sweet peppers, it becomes a palate-cleansing side salad, which works well alongside heavier accompaniments or as part of a light meal made up of many components. 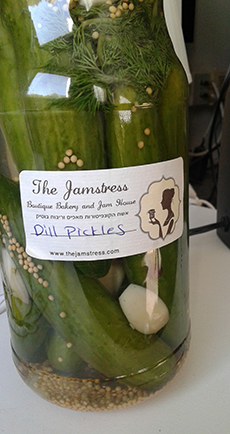 I have gone pickle crazy over the years, tweaking my recipe until arriving at this perfected version. For me, it’s something quite special, since real dill pickles are hard to come by in Israel. It literally takes a minute or two to throw these together, and a couple short days to reach fresh, flavorful results.