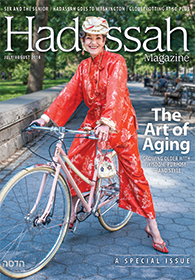 THE ART OF AGING
Aging as an “art” brought up the concept of “wise aging,” one to which anyone should subscribe. I admire the women you profile in the July/August 2018 issue for their high impact, high energy, high style and insouciance in the face of aging. There is much to learn from them.

However, presenting one of them on the cover on a bike, wearing wide, flowing pants with kitten-heel mules and a chic fascinator on her impeccably coiffed head is not wise aging—it is dangerous and silly. Biking can be fun, rewarding and a great mode of transportation. Even if you’re not wearing armor to protect yourself or are clad in spandex from head to toe, you ought not to encourage unsafe biking behavior and etiquette. A helmet would be advisable, as would be pants that track closer to the legs, or even a skirt/culottes/skort that is short enough to allow both modesty and safety. And most of all closed, flatter shoes.
Paula Zevin
Somerset, N.J.

As a life member of Hadassah and an avid cyclist for more than 50 years, I applaud your choice to feature a woman on a bicycle on the cover of the July/August 2018 issue. However, I was horrified that the bicyclist was dressed anything but appropriately. No helmet. Totally unreasonable shoes. Pants legs that can get caught in her spokes and chain.

When I turned to the supporting article—“Trending Women,” about senior fashionistas on Instagram—Tziporah Salamon is shown modeling another inappropriate outfit with her other bicycle. No helmet. Better shoes. While her pants might be O.K., her shawl is definitely a hazard. And the caption reads: “Dress for the Occasion.”

The U.S. Department of Transportation is clear: “Every bike ride begins with putting on a helmet.” USA Cycling adds: “If your head is in danger, your life is in danger.” The “art of aging” begins with safety.
Beverly Anderson
Voorhees, N.J.

The articles in the July/August aging issue were all interesting and relevant, but one very important concern was left out: Hadassah’s aging membership and its effect on the organization. I live in the Greater Washington Region, where members who become too old to participate or pass away are not being replaced by younger, active members. We might have become involved 40 or more years ago when we were in our 20s and 30s, but today’s young women are generally not interested in Hadassah, which is perceived as an organization for “old women.”

Many of our elderly members have decided that it’s someone else’s turn to take part. But that “someone else” isn’t materializing. Furthermore, these older members are not contributing financially at any level. I can’t say how many times I have heard, “I’m a life member—I gave my share.” Of course, that money is long gone.
Judy Rumerman
Silver Spring, Md.

Getting older today is not what it used to be, even when it comes to the current Hebrew language. When I grew up in the 1940s and even 1950s in Israel, we had what was called a moshav z’kenim, a home for the aged, from the word zaken (old). But you can’t find it now because it became the beit horim, a home for parents, or beit avot, a home for fathers or ancestors. When you go on a bus and want to get the lower rate for seniors, you tell the driver, “Ezrach Vatik,” translated as a veteran citizen, and this goes for movies, theater, museums, concerts, etc., where the Ezrach Vatik card can give every senior a discount.

Rahel Musleah’s article  “Growing Older Beats Getting Old” in the July/August issue captured the issues as well as the new energy around baby boomers and growing older that is bubbling up in the Jewish community. I am very grateful to you for this piece because it will help move this important work forward. The timing is particularly poignant for me because my partner and husband, Richard Siegel, interviewed in the feature, died just as the magazine landed in homes after a two-year journey with cancer. He was very proud of our work and grateful to know that it was featured in this terrific article.
Rabbi Laura Geller
Beverly Hills, Calif.

THERE’S NO SHAME IN GETTING OLDER
I am a life member of Hadassah as well as a good friend of Debra Rapoport, featured in your article “Trending Women,” about style-savvy seniors on Instagram. Rapoport and I are part of a group of female artists from around the country who frequently get together. Here we are at a recent gathering (from left): Patrice Wynne, Sheri Brautigam, Anne Balcer, Merle Schwartz Weismer and Debra Rapoport.

We all need to take the shame out of getting older!
Merle Schwartz Weismer
Lititz, Pa.

IN HER OWN RIGHT
In the July/August issue of Hadassah Magazine, the art profile of Susan Bay Nimoy, titled “The Rebirth of Eve,” used the subtitle “Leonard Nimoy’s widow grapples with grief through her new film.” But it should have read “Susan Bay Nimoy grapples with grief through her new film.” She is a person in her on right, not just an appendage to Mr. Spock.
George Alexander
Hamden, Conn.