‘The Last Schmaltz’ Is Anthony Rose’s Paean to Grease

Toronto-based chef and restaurateur Anthony Rose is known as the comfort food king of Canada. Now, thanks to his recently released debut cookbook, The Last Schmaltz: A Very Serious Cookbook

, his irreverent yet haute cuisine interpretations of stick-to-your-kishkes dishes will reach a far wider audience.

Rose is a rebel, and a forthcoming one at that. The Last Schmaltz is filled with his frank thoughts, handwriting and a scrapbook-like style that lets the reader in on the process Rose went through in opening his restaurants and writing this debut recipe collection.

Rose is unapologetic for his treyf applications of schmaltz. Yes, he grew up in a Jewish home, and yes, he does use schmaltz—his preference is for duck fat—with reckless abandon in the book and in his restaurants. But if lobster and bacon are the menu items in question, then it doesn’t seem to bother Rose—or the scores of adoring fans who regularly pack his many restaurants: the Jewish deli-style Rose and Sons; the Middle Eastern-meets-Eastern European Jewish-themed Fat Pasha; the French bistro Bar Begonia and its adjacent burger and cocktail bar, Madame Boeuf; the barbeque grill house Big Crow; and Schmaltz Appetizing, a bagel shop.

The Last Schmaltz is separated into sections dedicated to the individual stories, concept and food of each of his restaurants—past, present, and seasonal. It was written, with the help of acclaimed Canadian food and travel writer Chris Johns, as a companion script to Rose’s evolution as a chef.

Readers may wonder if

Rose lives his life by the second definition of schmaltz, described on the title page of the cookbook as, “Excessive sentimentality, or overly emotional and sentimental behavior.” His nostalgic connection to the classic Jewish deli foods he grew up eating shines through, despite his predilection for treyf dishes. So looking beyond all the bacon, there is: gefilte fish; chopped liver; whitefish salad; schmaltz latkes; a Manischewitz vermouth cocktail; and an ode to Dr. Brown’s Cel-Ray Soda. He also pays his respects to one of the latest Israeli trends—whole roasted cauliflower—even though Rose admits in the book that he’s not the biggest fan of the dish.

Whether inspired by Israeli chefs like Yotam Ottolenghi, who influenced Rose’s fresh Middle Eastern cuisine at Fat Pasha; influenced by the legendary Jonathan Waxman, who instructed Rose in California cuisine years ago; and enchanted by Bonnie Stern, the Jewish culinary star whose challah Rose features in Last Schmaltz, the recipes find a happy medium between kosher nostalgia and modern, secular comfort cooking.

Not playing by anyone else’s rules but his own, Rose, a known bourbon enthusiast also boasts one of Toronto’s best collections of the spirit, has even curated a wine list at Rose and Sons diner for dishes usually paired with egg creams and root beer floats.

Rose’s mother, Linda, who opens the book with prose lauding her son’s work, specifically praises his grilled whole chicken recipe over anything else—so we are including it here. We also wouldn’t want you to miss out on Rose’s high-cuisine version of chopped liver, or his retro Bakerman Bars, the recipes to which appear below. 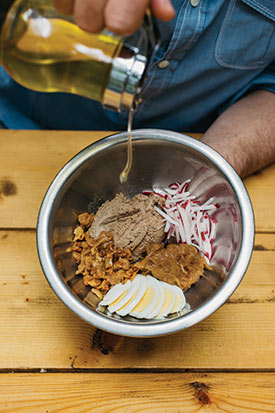 2. First, you’ll prepare the gribenes, or chicken skins, which will go on top of your liver as a garnish. Place your chicken skins in a pot of salted water and simmer for about 30 minutes. Strain, reserving the liquid. Transfer the liquid to a bowl and cool in the fridge. After it’s cold, you can remove and save the schmaltz that will have hardened on top of the poaching water. Place the schmaltz in a separate bowl, and discard the poaching liquid.

4. While your chicken skins are in the oven, season your rinsed chicken livers with the duck salt and let sit for 1 hour.

5. Heat a large pan on high and add the canola oil. Sear the chicken livers on both sides until they’re caramelized, about 1 to 2 minutes per side. Do not overcrowd your pan! You may need to do this in batches.

6. Once your chicken livers are seared, deglaze the pan with 1 Tbsp of the arak. Use a wooden spoon to scrape up any brown bits on the bottom of your pan—they’re delicious.

7. Put the seared chicken livers and the remaining arak in a food processor.

8. Blend the livers and, while the machine is running, add 4 tablespoons water and 1/4 cup of the schmaltz (see note). Process until smooth.

9. Cool the pâté and serve in a bowl with the caramelized onions, grated radish, hard-boiled eggs, and gribenes. Dress with extra melted schmaltz and mix tableside. Serve with some grilled challah or your preference of bread.

Blend all spices in a spice grinder until they’re quite fine. Mix spices and salt in a bowl. Store in a mason jar until needed.

**For the caramelized onions, slice the onions thinly and preheat a large pan over medium heat. Add the canola oil and butter to the pan. Once it starts to shimmer, you’re ready to fry the onions. Don’t worry about crowding the pan; it will work to your advantage. Let the onions start to brown on the bottom, about 3 to 4 minutes, then add the salt and thyme. Mix the onions to let the flavors combine. Leave the onions for another few minutes, then stir. Continue this process until the onions are evenly browned, then remove from the heat. Try not to stir the onions too much; rather, let them sit to really sear between your stirs. 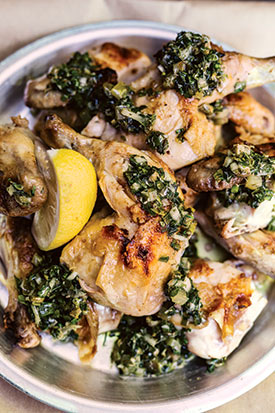 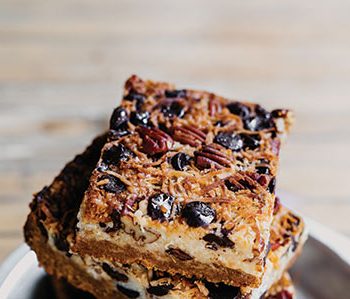 2. For the base, in a large bowl, mix the butter, graham cracker crumbs, and salt. Transfer the mixture to a 9 x 13-inch baking pan and spread it out evenly. Pack the base down tightly!

3. For the topping, evenly spread 1/2 cup coconut over the base. Follow with all of the chocolate chips, pecans, and salt. Finish by sprinkling the remainder of the coconut overtop.

4. Slowly and evenly, pour the two cans of condensed milk all over, making sure you get every last drop out.

5. Bake for 20 minutes in the preheated oven, then rotate the dish and bake for another 15 to 20 minutes until the top is golden and bubbling.

6. Let cool fully before slicing into 12 bars and serving.