Readers Weigh in on Politics in the Pews and Germany Travel 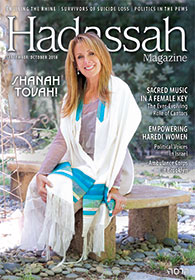 Survivors of Suicide Loss
Thank you for publishing “Life After Loss” in the September/October 2018 issue. My son, Josh, took his life 12 years ago, and the extreme pain of that loss is truly forever. This  article was written with so much understanding, like none other that I ever read. Josh was my only child, so we went from being a family to being a childless couple. I have gone to grief counseling and support groups, which have helped. The biggest help and the one good thing that came out of this tragedy was that three years after Josh’s death, we adopted a wonderful, precious daughter. She has brought unbelievable joy to our lives. It was bashert; she was exactly what we were looking for to find a purpose in life again. Of course, we think about Josh 24/7 and miss him beyond words, but we are enjoying life as much as possible. I will keep this article forever and read it often.

Politics in the Pews
In the September/October 2018 feature “The Politics of Spirituality,” Debra Nussbaum Cohen addresses the role of rabbis speaking from the bimah during an era of intense political conflict. The danger of clergy endorsing political positions or political candidates is that they assume that there exists one truth—their own truth. They use their bully pulpit to defend their version of the truth, with no opportunity for anyone in the congregation to stand up and express a contrary viewpoint. There is a lifetime of religious, text-based topics for rabbis to discuss with congregants without venturing into the political realm. Let rabbis draw from the eternal wisdom of the Torah to motivate, inspire and teach their congregants.

I am saddened that rabbis cannot speak out against President Trump without fear of harsh criticism from their congregants. By muting the voices of our religious leaders, we encourage inaction in the face of reprehensible violations of human rights in our country. We often rail against the “bystander effect” that was prevalent during the Holocaust, but we help create it when we discourage rabbis from advocating against political wrongdoing. The best rabbis are those who model for their congregants concrete ways to stand up against evil.

More on Germany, If You’re Willing to Go
When reading the Germany travel story in the September/October 2018 issue (“Seeking Ballast on the Rhine”), I was particularly interested in the sidebar titled “What To See” and its section on Frankfurt am Main and reference to the Westend Synagogue, which is located at 30 Freiherr vom Stein Strasse. As a child, I lived at 29 Freiherr vom Stein Strasse. In November 1938, I witnessed the plundering of the synagogue on Kristallnacht. After the burning of the Torah scrolls and siddurim in the middle of the street, the Nazis entered our house and arrested my father, who was sent to Buchenwald.

In February 1939, immediately after my father’s release, we left Frankfurt and began a circuitous trip to the United States, arriving in 1940.

I am pleased that the Westend Synagogue is, once again, in use by the Frankfurt Jewish community.

I never met my grandparents, nor the many relatives who were murdered by the Nazis and their followers. My late parents were in concentration camps, where they experienced the special kind of hell perpetrated by human monsters. No, I will not “enjoy” a river cruise on the Rhine River.

Israel’s Coalition Government Woes
I agree wholeheartedly with David Breakstone’s September/October 2018 piece, “American Zionists, This Is No Time to Give Up.” Israel’s Chief Rabbinate should be facilitating the conversion of people who, while not Jewish according to Orthodox halacha, have become Israeli citizens under the Law of Return. Breakstone makes excellent suggestions for lobbying for change. However, he ignores the factor that gives the rabbinate its political clout—the fragility of Israel’s governing coalition.

​No single party has ever held an absolute majority in the Knesset; therefore, every Israeli government has been a coalition. Yet, some governments are more stable than others. A party holding 55 seats can recover from a partner leaving the coalition more easily than a party that holds only 30 seats, as is the current situation with Likud. Electoral reform is the only way to reduce the undue power of the haredi parties. I urge Israelis to lobby for change, such as an increase in the percentage of votes needed to gain seats in the Knesset, which would favor the election of a less divided Knesset.