Hanukkah, the Festival of Latkes 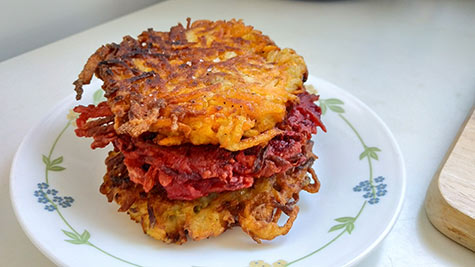 Let’s face it: Hanukkah, the festival of lights, could just as easily be deemed the festival of oil—or latkes. Although sufganyiot (yeasted doughnuts) of all kinds with whacky experimental fillings and decorative toppings reign supreme here in Israel, to me, Hanukkah primarily still means latkes.

Each year at Hanukkah time, I stand by my stove making batch after batch until I smell like a human french fry. The whole process is exhausting, from grating, to frying, to cleaning up splattered oil and the subsequent mountain of dishes piled high in the sink.

But this year, things will be different. This year I made the decision to fry my latkes in advance and freeze them in resealable zipper bags until the holiday—which begins the evening of December 2—when I will reheat them in the oven until crisp. The very best part of all this? Latkes freeze really well, so I doubt anyone at my family’s annual Hanukkah party will know the difference.

Preparing the latkes ahead also allows you to take your time and not be rushed. Make a day of it—as I did—and then you can be done with it. Settling in for a good latke-frying session, I like to turn on some music, let my mind wander, and dream up new ways to construct the potato pancakes.

Mixing it up this year, I’ve taken my basic potato latke recipe and replaced half the amount of potatoes with other vegetables—either zucchini, sweet potato or beets. All these latkes are made from shredded vegetables, so if you have a food processor, now is the time to dust off your grating blade. It really does make things go faster, but if not, you can grate by hand. It’s not Hanukkah, after all, until you have a few nicks on your fingers from the grater.

For accompaniments, I have recreated my mother’s classic pink applesauce. She makes her version with red-hot cinnamon heart candies that she purchases each Valentine’s Day and stores in the cupboard for baking. I had never heard of anyone else using these candies to make applesauce until I saw a recipe in Joan Nathan’s Jewish Cooking in America for cranberry applesauce, where Nathan mentions that she, too, adds Red Hots to her applesauce.

In my variation, I aimed to achieve the cinnamon flavor and spicy bite of the cinnamon candies by using ground cinnamon and fresh ginger. This sauce is best when pureed with a stick immersion blender—a must-have item in any kitchen for the winter season, when blended soups (should) feature on your menus.

Never one to leave things plain, my second sauce accompaniment is sour cream based with a hint of horseradish, garlic and dill. It is a bit more festive and tangy than plain sour cream, a perfect counter note to the richness of latkes. 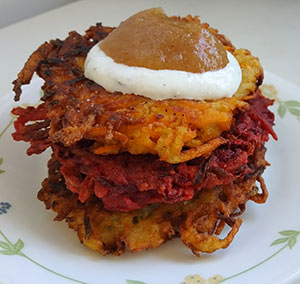 To freeze: Let latkes cool completely, then freeze in a container or zipper bag between sheets of wax paper for up to three months. When ready to heat, put them directly from the freezer into a 350 degree oven, covered, and heat for 25-30 minutes.

In a medium bowl mix sour cream with salt and spices. Chop fresh dill, and grate fresh horseradish with a microplane. Alternatively use an already prepared horseradish sauce. Combine all ingredients, and adjust to taste.