In my house, my sons and I eat meat once a week, on Shabbat. (My husband is vegetarian.) Whether our infrequent meat meals somehow relate to the subtle influence of my husband, or the produce-centric Israeli style of eating, or my background as a pastry chef that precludes me from feeling totally comfortable handling raw meat, who knows?

Dough, however, is a completely different story. While others seem to effortlessly reduce their starchy carbohydrate intake—and consequently shed their love handles—we spend our weeknights enjoying saucy shakshuka with freshly-baked pitas; homemade pizzas and pastas with zingy sauces; dense, chewy bagels; and legume-based soups with a nice warm bread close to hand.

In cold winter months, beef and barley soups and stews have become beloved by generations of Ashkenazi Jews. Found in many variations—some with beans, some with mushrooms, some with veggies and even tomatoes but always with barley—I like to whip up this almost vegetarian variation for my husband, who makes an exception for chicken stock (for whatever reason, you’ll have to ask him!).

Remember the Manischewitz soup packets with the little, quick-cooking beans and dried spices? My mother used to make incredibly delicious pots of soup using those packets as her base, and that was the flavor profile I aimed for when creating a homemade version of mushroom and barley soup. Mine is as thick as a stew (especially the next day) and “meaty” without including meat. The best part about serving it alongside my crusty outside, pillowy inside, Pecan Sandwich Bread is that the next day you can toast a slice for breakfast, smearing it with melting butter and strawberry jam. It’s a little treat for the carb lovers who just want to live a little. 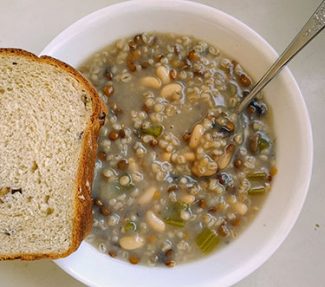 A comforting winter staple in Askenazi Jewish households, this version of beef and barley soup omits the meat in favor of hearty white beans, brown lentils, roughly chopped mushrooms and pearl barley, which come together with chicken stock (or beef stock) to create a warming, porridge-like stew. 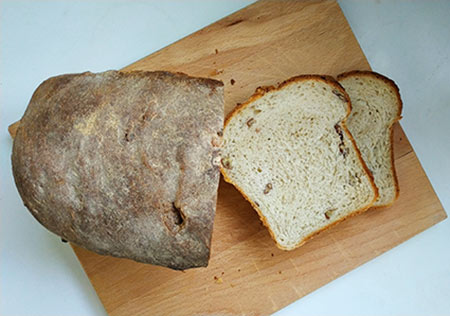 Soft on the inside, crusty on the outside, this bread gets a sweet, nutty crunch from chopped pecan halves. The thick crust helps preserve the bread, which stays fresh for up to three days. Leftovers are perfect for sandwiches or as breakfast toast.

* This process can be sped up by letting the shaped loaf rise in an oven with only it’s light on.