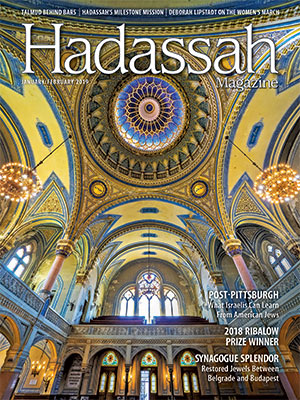 ‘PUZZLING’ OVER THE COVER
Have you considered having the January/February 2019 cover—a photograph of the resplendent synagogue in Szeged, Hungary—made into a jigsaw puzzle? Say, a thousand pieces? Because I would buy one! That synagogue is just amazing, more beautiful than any church interior I have ever seen, in person or in pictures.
Donna Jaffe
Winston-Salem, N.C.

AGREED, LET’S WALK AWAY
I applaud “It’s Time to Walk Away,” the excellent and concise article by Deborah Lipstadt in the January/February 2019 issue. Her urgent call to leave the national Women’s March, a dangerous and potentially deadly movement that has insidious anti-Semitic undertones both from its national leaders and those whom they endorse, must not be ignored under the false guise of women’s rights. The fact that they march under that flag is almost laughable if it were not so terrifying.
Ruth Domber-Rozenberg
New York, N.Y.

Deborah Lipstadt’s essay touched upon the Nation of Islam’s Louis Farrakhan. His anti-Semitic ravings are echoes of Henry Ford’s more dangerous verbal war against Jews in the early 20th century. Ford’s books The International Jew and The Protocols of the Elders of Zion made him, in Hitler’s own words, an “inspiration” and a “great man.” The newspaper he bought, The Dearborn Independent, for years promulgated a Jewish conspiracy against the world until 1926, when a San Francisco lawyer, Aaron Sapiro, sued Ford for libel. Ford, one of the most popular and powerful figures in America, did all he could to discredit Sapiro, even taking the case to Congress. In the end, however, Ford lost and had to apologize to the Jewish people of this country. His offer of restitution was turned down by Sapiro.

Is there no Jewish man, woman or publication today with the courage to sue Farrakhan for libel, and make him prove his accusations against the Jewish people—or apologize?
Philip Springer
Pacific Palisades, Calif.

MORE VOLLEYING OVER TRUMP’S RECORD
I was incensed to read Gertrude Donchin Chityat’s letter to the editor praising Donald Trump in the January/February 2019 issue. Apparently, the only thing she cares about is that he moved the American Embassy to Jerusalem. She closes her eyes and ears to the scandals, financial machinations, lies, crude remarks and tweets, not to mention his ignorance as to what America is supposed to be about. How is it possible for anyone to be so one-dimensional? We are citizens of the United States, not Israel, and as such we are affected more by what the president does in this role than by what he does for Israel. Not that he’s done much there, anyway. Except for the cozy relationship between the Kushner and Netanyahu families, the rest of his policies are as detrimental to Israel as they are to the rest of the world.
Barbara Lipkin
Naperville, Ill.

I commend Hadassah Magazine for publishing a letter from Gertrude Donchin Chityat under the headline “A Radically Different Assessment on Politics and Judaism.” I, too, know at least one Jew who voted for the president for perfectly good reasons. What I don’t know is how they ignore that he has also let loose the dogs of hate, racism and anti-Semitism. Perhaps being an immigrant rather than a “native-born” American, I lack sufficient faith that the country will survive this excursion away from civilization and that Jews will not be forced to flee from America, as we have from so many other countries. We may not know for several decades whether Ms. Chityat will then be viewed as a “bystander” (or worse), but my concern is that the camel has been allowed to get its nose under the tent.
Terry Goldman
Los Alamos, N.M.

I was shocked but also delighted to see a pro-Trump letter in Hadassah Magazine. Whatever else one can say about Trump, he has been a great friend to the Jewish people and the State of Israel. The writer’s observation that Trump haters take for granted that “all decent people share [their] assessment” of the president is spot on. Kudos to Gertrude Donchin Chityat for having the courage to speak her mind despite the tyranny of political correctness that is rampant in so many Jewish organizations, and despite the moral condemnation that is directed at anyone who dares to deviate from groupthink.
Janet Ammerman
Chevy Chase, Md.

Bravo, Gertrude Donchin Chityat, for setting the record straight about our president. Unfortunately, there seems to be a misguided assumption by some who feel that if you are decent and Jewish, you must hate Trump. Shockingly, that supposition could not be further from the truth. In my city of Phoenix, we have an incredible group of 140 (and growing) conservative Jewish women and religious leaders who thank God every day for Trump. In the neighboring city of Prescott, there are 700 members of a Republican group—not all Jewish but certainly all decent—who feel the same way.

So may I stand up proudly and say, “Thank you, President Trump, for being the first president to truly support Israel and the Jewish people, for doing your best to keep our country safe, and for Making America Great Again.”
Patricia Kephart
Phoenix, Ariz.

ANOTHER CAUSE OF OSTEOPOROSIS
I appreciate Sarah Yahr Tucker’s article, “The Truth About Our Porous Bones,” in the January/February 2019 issue. I would like to add celiac disease to the list of possible causes of osteoporosis and osteopenia.

Celiac disease is an autoimmune disorder triggered by consuming a protein called gluten, which is found in wheat, barley and rye. One out of every 133 Americans has celiac disease, although approximately 83 percent of them haven’t yet been diagnosed. Celiac disease causes the lining of the small intestine to become flattened when exposed to gluten. This can lead to the malabsorption of nutrients such as Vitamin D. In fact, some women first learn of their celiac diagnosis because they are found to have osteoporosis at an unexpectedly young age, similar to some of the women interviewed in the article.
Michelle Farber Daniel, Psy.D.
Millburn, NJ

JEWS, PITTSBURGH AND GUNS
In the essay “An American Birthright” in the January/February 2019 issue, the author mischaracterizes the cause of the Pittsburgh synagogue killings perpetrated by an unrepentant Jew hater. The cause was not guns, as the writer presumes. Guns are not an existential threat to American Jewry any more than trucks, bombs and knives are. Pure evil is the continuous threat nurtured by a secular, progressive American society. The Second Amendment—the right to bear arms—is an American safeguard for those in harm’s way.

If every Jewish American were to legally arm, own and train with a defensive weapon, handgun, shotgun, etc., this protected constitutional act would send a powerful message to the enemies of Jewish Americans: “We are armed, we will defend ourselves and we will not go quietly into the night.”
Mike Fox
Sarasota, Fla.

HADASSAH’S PRESENCE IN PITTSBURGH
We want to thank you for the article “An American Birthright” in the January/February 2019 issue, about what Israelis can learn from American Jews after the October 27 tragedy in Pittsburgh. Everyone now knows how special and caring our community is, after seeing us come together in the wake of the shooting.

Hadassah has held a prominent position within the Pittsburgh Jewish community for over 100 years. Therefore, it’s a struggle for many of us local Hadassah leaders to understand why the national organization closed its office and diminished its presence in the city at this time. We have long had an office in Squirrel Hill, a space that had been the gathering point for members throughout the Greater Pittsburgh Region—but now it is gone.

In Pittsburgh, Hadassah is associated with creating new leaders among the Jewish women active in local Jewish life. It also collaborates with other Pittsburgh organizations and with Israel. We would like national Hadassah to appreciate how disappointed many of us are with the decision to close the Pittsburgh office.
Marlene Silverman
Pittsburgh chapter president 1984-86

Hadassah Response: Hadassah and its Member & Unit Services Division are committed to retaining a presence in the Pittsburgh community despite no longer having an office there. This decision was made after months of deliberation and conversation with local leadership. Our Pittsburgh chapters continue to provide a place for our members and leaders to connect and support the important work of Hadassah.