Mark Bittman Is Making ‘Dinner for Everyone’

Mark Bittman was nearly a decade into his The Minimalist food column at The New York Times when he introduced to the world the joys of no-knead artisan bread making. To do so, he shared a recipe from master bread maker Jim Lahey, proprietor of the renowned Sullivan Street Bakery in New York City. That article—all the way back in November 2006—went viral, and it was soon featured on hundreds of blogs. Ultimately, Bittman—via Jim Lahey—changed how home cooks approached bread making in their own kitchens.

During Mark Bittman’s long career as a food writer and recipe developer—he is the author of 20-plus books—he has honed his instincts as a culinary guide as well as a passionate food activist. He is a faculty member at Columbia University’s School of Public Health and is passionate about sustainable food systems. He has consistently gifted us refined instructions on how to prepare the most basic of meals, both in his Times columns (The Best Scrambled Eggs, which he learned from James Beard himself) and in his cookbook How to Cook Everything: 2,000 Simple Recipes for Great Food

In his latest book, Dinner for Everyone

, he shares his take on 100 iconic dishes culled from world cuisine, each from three different perspectives: The easy version; the vegan version; and the all-out version. Vegan versions tend to fall on the healthier side, often featuring whole grains and seeds. The all-out versions call for ingredients that might be hard to find outside of a specialty store, like tofu skins and mung beans, making this book a type of Goldilocks scenario where it’s up to the home cook to decide which version of any given recipe works.

Bittman, 67, himself is a flexible eater, jumping back and forth between the vegan cuisine he highlighted in his No. 1 New York Times best seller The VB6 Cookbook: More than 350 Recipes for Healthy Vegan Meals All Day and Delicious Flexitarian Dinners at Night

and his non-kosher lust for bacon. Having been raised in a Jewish household and within the framework of the Reform youth movement in 1960s New York, Bittman today espouses a Jewish cultural inheritance in the values he promotes within the food industry—food waste and the treatment of workers and even farmed animals—rather than in his dietary choices.

Though Bittman fills his new work with riffs on American and French classics, what he excels at here is simplifying intriguing, popular global flavors, from jerk to mole to Thai curries. Beyond that, his tutorials encourage readers to put down the jarred sauce and make their own. A baby step in the crusade to reclaim dinner as a homemade, non-processed reality for families. 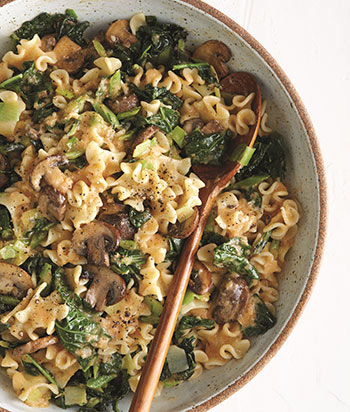 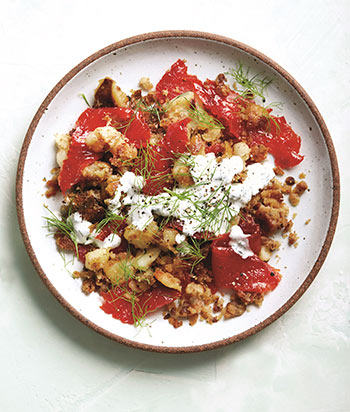 Potato Hash With Gravlax and Creamy Horseradish
Serves 4 to 6 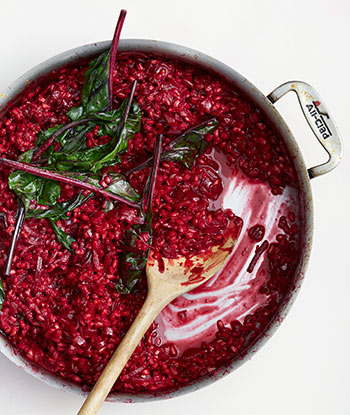 All recipes reprinted from Dinner for Everyone