“There’s no reason to reinvent the matzah ball,” says Amy Rosen, editor of lifestyle site Modern Farmer and veteran cookbook author. So iconic to her is the beloved matzah ball that it even graces the cover of her new book, the deli-inspired Kosher Style: Over 100 Jewish Recipes for the Modern Cook

“I’ve freshened [classic recipes] up a bit—less fat, less brown, more green,” she says, “and I’ve put together a cookbook that will give people the recipes to successfully execute the classics they fondly remember—even if the matriarchs of their families have passed on.”

But for the most part, Rosen has kept classic recipes in tact, rejecting the pull of food trends that encourage home cooks to meld flavor combos that have no business appearing in the same recipe.

“So many Jews, even if not observant, connect with their Judaism on a cultural level,” Rosen reflects. “And a big part of the culture is the food.”

As for the designation “kosher style,” Rosen adopts it in honor of the many Jewish delicatessens whose food, while Jewish, doesn’t strictly adhere to the laws of kashrut. Historically, these North American kosher-style hangouts have been the equivalent of a synagogue for less observant Jews—a holy ground within which to sit, enjoy a pastrami on rye and take comfort in their cultural Judaism.

Rosen, a lifelong Toronto resident, readily shares her Jewish-food-as-culture bona fides, including that she eats bagels for breakfast every day—or at least half of one—toasted and ideally covered with a good schmear of homemade cream cheese and home-cured lox.

A seasoned food and cookbook writer, she’s received accolades for her past cookbooks that focused on the food of contemporary Toronto chefs, party girl recipes and pop culture-based dishes for 20-somethings. Yes, she’s inserted Ashkenazi Jewish recipes into her books here and there, but in Kosher Style she dedicates an entire book to her proud, not to mention delicious, heritage and the recipes that embody its soul.

A chapter titled “Eat! Eat!” features Miami ribs, chopped liver and salami sandwiches, and her maple soy brisket, which Rosen tells me is by far her No. 1 requested dish by loved ones. Other delights are her meat kreplach, everything bagel schmear and sour cream pecan coffee cake muffins that make me drool a little every time I flip passed the page.

“I actually think Ashkenazi food is back in a big way, with modern delis and bagel spots suddenly opening up across North America,” Rosen tells me. “[Ashkenazi food] celebrates our roots in Poland, Russia and Germany, our growth in North America and the survival of a culinary repertoire based on humble ingredients meant to sustain.

“The plot twist is, they are also a delight,” she says before adding slyly, “You’ve gotta try my borscht.”

Rosen’s story telling shines through in her charming, and often amusing, anecdotes that are accompanied by the whimsical illustrations of Alanna Cavanaugh. (Most recipes are accompanied by full page photos as well.) One particularly hilarious story centers around a group of regulars she has encountered at a local deli’s early bird special. Others are quirky and informative, like why North American Jews love Chinese food.

“From St. John’s to Fort Lauderdale, Montreal to Manhattan, I’ve enjoyed meals and moments unique to the Ashkenazi experience, complete with humor, wisdom and chopped liver,” Rosen writes in Kosher Style. That sentiment resonates from within the pages of this beautiful cookbook. Included here are Rosen’s recipes for Kasha Pilaf, Sweet & Sour Meatballs and Amy’s Perfect Pecan Buns. 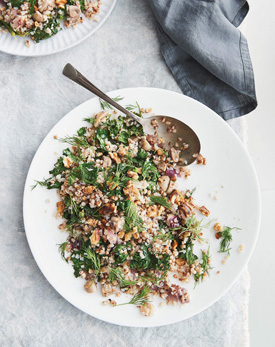 This is a 21st-century Semitic pilaf for a generation of kasha haters. What is kasha? It’s a grain—buckwheat groats to be exact; a traditional Jewish dish that my three brothers and I loathed. My oldest brother, David, said it was impossible to make people like kasha. I think it was the mushy bowtie pasta and neon yellow soup base we grew up on. But during a recent Rosh Hashanah, I made it my mission to turn it tasty, adding kale, nuts, dill, onion and meaty mushrooms to the mix. Before the night was over, David had secretly texted many family members to get their votes. He liked it, and so did everyone else. My dad said, “I can’t get excited about kasha because it’s kasha. But I will say it’s the best kasha I’ve had.” And that, my friends, is considered a win in the Rosen family. 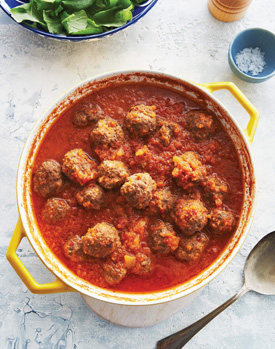 One of the dishes we ate most in our house when I was growing up was Swedish meatballs. I think my mom got the recipe off the label of either Welch’s grape jelly or Heinz chili sauce, because besides ground beef, those were the two ingredients in which she’d simmer the balls. She still makes them and we still eat them happily today. This is my take on sweet-and-sour meatballs. A lot fresher, albeit with a ketchup tip of the hat to the 1980s.

Note: Depending on the sweetness of your vegetables and pineapple, you may want to adjust with more ketchup, vinegar, salt, etc. before serving, in order to hit that perfect balance. Taste your food! 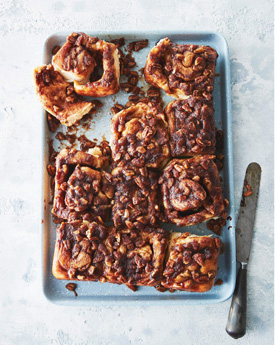 You may not know this about me, but I own a business in Toronto called Rosen’s Cinnamon Buns. This recipe is not the one for our famous buns, because if I printed that recipe I’d be out of business pretty fast. Still, these are light and fluffy, with a caramelly glaze and the crunch of pecans. They should serve you well should you choose to open your own pecan bun business.

Recipes excerpted from Kosher Style: Over 100 Jewish Recipes for the Modern Cook

by Amy Rosen. Copyright © 2019 Amy Rosen. Published by Appetite by Random House®, a division of Penguin Random House Canada Limited. Reproduced by arrangement with the Publisher. All rights reserved.