From Shuk to Table With Chefs Einat Admony and Janna Gur

It’s hard to be shy in this world and really make a splash. Luckily for Einat Admony, her outgoing personality helped her find the chutzpah she needed to not only succeed in New York’s intense restaurant scene, but to create her own burgeoning food empire. Today, Admony, 48, owns four restaurants—one of which has six locations—and has become a recognizable figure and force in global Israeli cuisine. She also became a cookbook author after the publication, in 2013, of Balaboosta

Now, teaming up with Janna Gur, 61, the celebrated Israeli food personality and founding editor of Al Hashulchan Magazine, the women have released Shuk: From Market to Table, the Heart of Israeli Home Cooking

—one of the year’s most anticipated accounts on modern Israeli cuisine.

, from 2007, with a modern twist and a nod to the traditional dishes of Admony’s mixed Middle Eastern heritage. Similar to Adeena Sussman’s wildy popular Sababa: Fresh, Sunny Flavors From My Israeli Kitchen

, Shuk is likewise inspired by the products and lively vibe of Israeli open-air marketplaces.

“You don’t have life in Israel without the shuks,” says Admony. “They are the heart of life in Israel—full of energy and color, good food to take home and to eat there. And you will always find the locals there.”

In our interview, she recalls trips to the Carmel Market in Tel Aviv with her father, and the stops they would make in the adjacent Yemenite Quarter for pancake-like lachuch flatbread.

You can feel Admony’s cooking personality on almost every page, especially in the boldly spiced recipes like chicken patties (meatballs) with chard, leeks and celery in a lemony broth; the collection of slow-cooked, spicy stews to ladle over hand-rolled couscous (we’ve got the quick version for you below); and a toned-down take on Jerusalem mixed grill, the popular street food that usually includes spiced sautéed chicken hearts and livers but is made here with Merenguez sausage and chicken thighs.

Of her signature mastery of couscous, she tells me that she has “devoted so much of my time and my heart to couscous. Real, hand-rolled, twice-steamed couscous, not the dried version you’ll find on supermarket shelves. Real couscous is light as a cloud and so delicious you can eat it alone. But it takes some work and patience, so it is a real treat.”

Hand-rolled couscous as a landing pad for mafroum—a dish of egg batter-coated potatoes stuffed with ground meat, pan fried, then simmered in a piquant sauce—is what she says inspired her to open Kish-Kash. This, her latest restaurant, is where serves mafroum and other dishes piled over her legendary hand-rolled couscous.

Gur’s deep knowledge and expertise on topics like Israelis’ love for dairy and the origins of the iconic Israeli breakfast receive significant coverage in Shuk. In complementary perfection, the two authors’ Jewish backgrounds—Admony claims Persian and Yemenite heritage while Gur is Eastern European—merge seamlessly to depict how Israelis are varied, and our food culture is one big melting pot.

“It’s healthful eating, but it’s not diet food,” Admony says, speculating on why the cuisine of the Levant has become so popular. Also, she points out simply, “It’s delicious!”

According to the pair, at any Israeli table there should always be a salad. “We can’t imagine a meal—be that lunch, dinner or breakfast—without a salad,” they write. Both Israeli chopped salad and schnitzel should only ever be made fresh to order, and there is a correct and an incorrect ratio of bulgur wheat to vegetables in tabbouleh salad that might surprise you. Other tidbits interspersed between recipes include a beautiful explanation of herbs and how they are used and stored in Israeli cuisine; and lesser-known historical tangents, for instance a fascinating exploration of the origin of amba—a pickled mango sauce typically served with street food and in Iraqi cooking that Admony grew up eating. In the book, she uses it inventively in salad dressings and exotic aiolis.

Admony and Gur spotlight Israel’s most popular open-air markets and share their favorite vendors and eateries—from holes in the wall that only a local would know to well-known favorites.

And in this season of pumpkin-spiced everything in America, readers might be particularly interested in the pair’s recipe for sweet coffee hawaij, found in their chapter of spice blends. Their hawaij mixes cloves, nutmeg, cinnamon, ground ginger and cardamom in a combination that the women claim makes for a wildly spiced pumpkin pie.

In the book, I urge you to read through—and then try out!—recipes for Preserved Lemon and Mint Pesto; Tbit, an Iraqi whole-chicken and crispy-topped rice casserole; a version of Iraqi cholent that includes sweet spices like cardamom and cinnamon; grilled fish with za’atar chimichurri; harissa-spiced salad of oranges, olives and red onion; and Admony’s famous crispy cauliflower with Bamba and peanut tahini sauce.

Here, I am sharing recipes for three dishes to whet your appetite as well as a guide to charring eggplant. 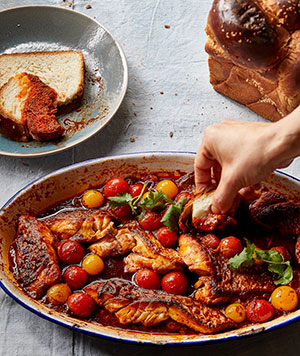 Dag hareef, a spicy fish bathed in a flaming-red fiery sauce that begs for a thick slice of challah for dipping, graces almost every North African table on Friday nights. In the Libyan-Tripolitan version, known as chraime, the fish cooks in a minimalist sauce of oil infused with cumin, caraway, and lots of paprika. The more elaborate Moroccan version, which is what my aunt would make, contains fresh tomatoes, peppers, and an entire bunch of cilantro. Cherry tomatoes aren’t traditional, but they give this gutsy dish a touch of bright sweetness.

This dish is meant to be spicy, but how spicy is up to you. Start with half the amount of harissa and chile, and fire the dish up to your liking.

Different versions of this method have circulated around Israeli food blogs for a while now, but they sounded almost too good to be true. In less than 20 minutes, without any special utensils, you can make couscous that tastes and looks like the real thing? Turns out that yes, it does work (mostly)! This method produces coarser crumbles than couscous made the old-fashioned way, but it’s still fluffy and delicious, and infinitely better than anything you can get from a box. 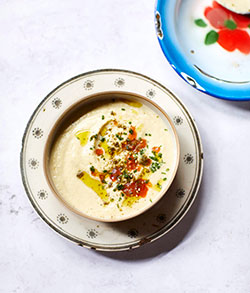 This minimalist soup, inspired by a recipe from noted Israeli chef Tomer Agai, is all about showcasing the lovely smoky flavor of “burnt” eggplants, achieved only through charring eggplants on an open fire or on a charcoal grill.

*Charring Eggplant
This is the sexiest way to cook an eggplant, because even before you add any seasonings or mix it with other ingredients, the eggplant already has a lovely smoky aroma. The method is easy, just a bit messy.

Charring on a gas stovetop: Line your cooktop with aluminum foil. Place a wire rack over one of the burners and put an eggplant or two on the rack. Turn the heat to medium and char the eggplants over the flame, turning them as needed with tongs, until the skin is blackened and blistered on all sides. During roasting, the flesh should collapse, making the eggplant very soft. If you sense tougher spots, position the eggplant so the tougher spots get direct heat and leave to char for a few more minutes.

Often the skin bursts during charring and some of the liquid oozes out—no need to worry, this is all part of the process (but aren’t you glad you lined your cooktop?). Total cooking time for a typical large globe eggplant is 25 to 35 minutes; smaller varieties may cook faster. And in case you are wondering, there’s absolutely no need to prick eggplants before putting them on the stove.

Charring under the broiler: Line a baking sheet with aluminum foil, arrange the eggplant on the pan, and place it as close to the broiler as you can without actually touching the element to the eggplant. As one surface blackens, turn the eggplant until all surfaces are nicely charred and the eggplant is fully softened. With this broiler method, they’ll soften up nicely but won’t have as much of that heady aroma we like so much.

Charring on a grill: If you have an outdoor grill going, use it! A charcoal or, ideally, hardwood grill fire will produce sublime results. (A gas grill will work too, though it won’t give you that kiss of wood smoke.) Whenever you’re having a barbecue, toss an eggplant or two on the grill and let them roast while you’re grilling the rest of the menu.

Once properly charred, remove the eggplants from the heat source and transfer to a colander to cool a bit and drain some moisture. When cool enough to handle, peel them or slit them open and scoop out the flesh using a large spoon.

Drizzle the eggplant flesh with a bit of fresh lemon juice, which will keep it nicely light colored. Some cooks like to season the eggplant while still warm, feeling that it will absorb flavors better. Others prefer to put the peeled eggplant flesh in a colander for about an hour to let it drain even more moisture.

Charred eggplant flesh is extremely versatile. You can use it to make dips and salads, fillings for pastry, soups, or topping for shakshuka, or you can serve it whole, with all kinds of goodies on top.

Excerpted from Shuk: From Market to Table, the Heart of Israeli Home Cooking