Hoffy’s Is a Culinary Tribute to Antwerp’s Jews

Hoffy’s Restaurant and Takeaway, a staple of the Antwerp Jewish community, started out with a single cod. It was from that one fish that the family patriarch, a survivor of Mauthausen concentration camp, got into the fish business and eventually opened up a Jewish fish shop on the shores of Europe’s second-largest salt water port.

, a book of recipes out in early April, is a loving tribute to that shop and the legendary restaurant it spawned, today run by the three Hoffman brothers. A love letter to the city of Antwerp, Belgium, and its ultra-Orthodox Jewish community, the book focuses on Hoffy’s Restaurant and Takeaway joint, which opened up in 1985 as the first of its kind in the city, hiding in plain sight from Antwerp’s non-Jewish population.

Opening up the pages of this book offers a snapshot of ultra-Orthodox life in a city that has a surprisingly long Jewish history spanning eight centuries, mostly connected to the local diamond industry, which is the largest in the world. Hoffy’s Restaurant, very much a part of that community, has over time become a beacon of hope in a Europe that is increasingly experiencing prejudice and anti-Semitism.

The restaurant serves observant Jewish customers looking for a taste of home—a mix of largely traditional Ashkenazi fare with a few Sephardi dishes thrown in—from the prominent family who still owns the original fish store as well as a home goods shop and kosher market, all of which line the same street—Lange Kievitstraat.

Hoffy’s Restaurant, however, is unique among the family’s empire for its popularity with non-Jewish city residents and tourists alike. They are drawn to Hoffy’s special tasting room where family ambassador Yumi Hoffman provides a selection of morsels paired with explanations of Jewish customs, holidays and traditions.

“It is a cliché to say ignorance breeds contempt, but it’s true, and so we want to invalidate it,” writes Moshi Hoffman, the main cook of the family and co-author of the recipe collection. “And we’re succeeding, we really are. There are cities that want us to go there too for that very reason. Take Brussels. Oh, that city has pressed us so hard to open a Hoffy’s there.”

The book provides beautiful descriptions of the Jewish holidays, making it an invaluable primer for a non-Jewish audience. Among the book’s photos of Hasidic boys studying Torah, the community synagogue, the butcher and the many Hoffman brothers themselves are stories paying tribute to the family and their heritage—brave patriarchs risking it all and matriarchs famous for their chicken-in-a-pot with drippings so good the family would sop them up with bread.

“That sensational flavour is literally seared into my system,” writes Moshi Hoffman, whose recipe for his mother’s gribenes is sandwiched between matzah balls and chrain in the book’s Passover section.

Indeed, Moshi Hoffman is the first and only ultra-Orthodox Jew to study domestic catering at the Provincial Institute Piva in Antwerp. Committed to using local products in his cooking, Hoffman takes care to keep the fare so strictly kosher that he forgoes risky produce like Brussels sprouts, broccoli and certain strawberries that could harbor tiny insects.

Though the restaurant today—and its recently published cookbook—are a far cry from the gigantic barrels of herring, gefilte fish and potato salad once sold out of the family’s original fish shop, there is some “old” imported into this “new” establishment. Gefilte fish remains a staple on the restaurant’s menu and its recipe falls under the “Shabbat” section of the book. Indeed, Hoffy’s is the culinary embodiment of the old world meeting the new one in a tasty, warm and respectful embrace.

Enjoy the recipes provided here for traditional Ashkenazi cabbage and noodles as well as the more elegant rolled fillets of spinach-stuffed sole. 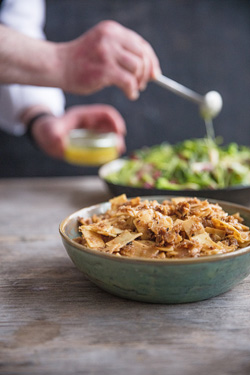 Tip: Any leftover caramelized cabbage can be frozen for another time. 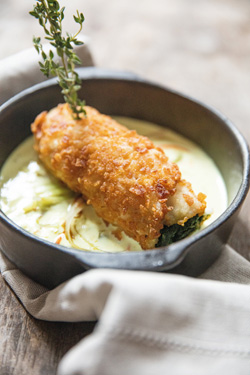 FOR THE COATING
1 whole egg
2 teaspoons mustard
6 cups cornflakes, crushed in the blender

Place one fillet of sole in the center of a plate with the seam underneath and spoon the sauce around it.