One Hundred Years Ago Was Yesterday

Most of you know that the Never Again Education Act, signed into law in May, is a major focus of Hadassah advocacy. We worked closely with Representative Carolyn Maloney of New York, who authored the legislation. We invested two years of effort, mobilizing members across the country to urge their representatives in Congress not only to support the measure but to become co-sponsors. The bill—which provides $10 million in federal funding for Holocaust-education programming—ultimately passed 393-5 in the House of Representatives and by unanimous consent in the Senate.

Congresswoman Maloney introduced the NAEA on April 10, 2018, but both her role and Hadassah’s effort would have been impossible if it weren’t for a much earlier legislative initiative—the adoption of the 19th Amendment, which guaranteed women the right to vote. It was 100 years ago, on August 18, 1920, that Tennessee became the 36th state to ratify the amendment, crossing the threshold that guaranteed its inclusion in the United States Constitution.

Hadassah’s legislative outreach—and that of every women’s organization and collective—stands on the platform of women’s suffrage. The historic inability to vote explains why the campaign to get the 19th Amendment approved, from its first introduction in Congress until its ratification, took not two years, but 42.

Everyone should cherish the right to vote, but it is not hard to grasp why groups long denied the right are the least inclined to take it for granted. Considering the Jewish memory of lands where our forebears had few rights and also the generations of enfranchised American women who have continued to struggle for full equality, it’s clear why voting is a central plank of Hadassah’s agenda. 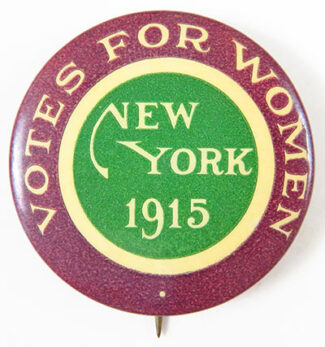 Hadassah is a proud part of the movement to register women voters and mobilize a record-breaking number of women to cast ballots in 2020. With more than 40 percent of eligible voters not participating in recent elections, the nonpartisan #HadassahVotes initiative goes beyond registration to emphasize planning and committing to vote—in person or by mail.

From the moment Henrietta Szold convened the first Hadassah meeting in 1912, she and her colleagues knew that the only way they could play a key role in building the Jewish homeland was by empowering themselves. And given that tectonic shifts caused by World War I played a major role in advancing the 19th Amendment, it’s likely our founders had little expectation in 1912 that women’s suffrage was only eight years away.

Nevertheless, by 1918 they had laid the foundation for Israel’s health care system and were recognized as major players by the male-dominated Jewish establishment. Hadassah’s success in organization, in building medical, educational and social welfare institutions, made our name synonymous with women’s initiative and empowerment. And the organization’s influence was magnified by the right to vote.

My mother and mother-in-law both taught me to take voting seriously, to know the issues and candidates and understand that I could make a difference. And when my children were little I made a point of taking them with me when I voted. The act of voting is a part of our civic Haggadah, a sacred tradition that we are obliged not only to undertake for ourselves but also to enable for others.

As Americans concerned with the health, security and rights of all our nation’s citizens, of the Jewish people and humanity, it is our responsibility to strengthen the democratic process by participating in it. The higher the voter participation, the better democracy works.

Like tikkun olam, great causes—freedom and racial equality, voting rights and gender equity—don’t have deadlines. And often once a great goal is achieved it still has to be maintained and expanded. In a very real sense, the best way to honor the triumph of women’s suffrage is to act as if it happened not 100 years ago but yesterday.