For many of the most adventurous Israeli cooks, knafeh remains a hallowed dessert almost exclusively enjoyed in a restaurant. After all, it’s no easy feat to work with the seared, buttery, orange-tinted phyllo dough noodles, cooking them together with sweet cheese and finally dousing the whole pan with floral syrup. Knafeh is like sushi—even accomplished chefs prefer to let the masters make it.

Well, the global pandemic and its ensuing stay-at-home orders have turned that notion on its head.

At home, I make almost everything from scratch, but I have always avoided knafeh—a specialty of the Arab pastry kitchen—for fear of failure. But, it’s the favorite dessert of my husband, Eli. He grew up a few miles from Nazareth, a Northern city with a sizable Arab population and where knafeh is a local delicacy.

Try as I might, I just couldn’t wrap my head around knafeh. I’ve ventured into the kitchens of Arab bakeries before—I’ve seen chefs stationed in front of specially designed rotating stoves where gigantic deep-lipped trays of knafeh sit directly on the flame. The chefs then nervously invert these massive batches of knafeh onto another tray to reveal the golden base, beads of sweat running down their foreheads. 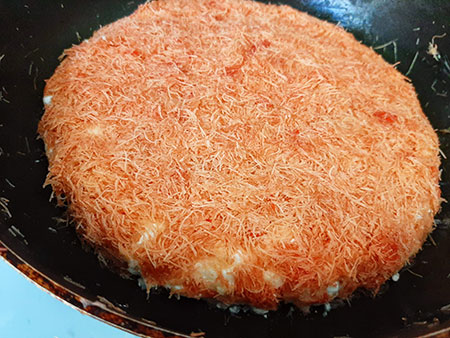 It all seems too difficult to replicate at home. But then came my breakthrough: Kadaif shredded phyllo dough, which is available in the freezer section of Arab markets and in many specialty and regular supermarkets in America. These shredded-dough noodles, also called kataifi, cook up fast and lend a nice crunch in dishes, both savory and sweet. With these noodles in hand, I decided to dig a little deeper into knafeh.

The West Bank city of Nablus likes to claim ownership of the sweet dish, but it’s really more of a regional classic. Popular in nearby countries such as Lebanon and Turkey, where it also goes by the names kunefe and kanafa, variations include differences in cheeses (softer cheeses like ricotta, versus Armenian-style string cheese); spiced syrups; and even some that use a semolina cake mixture as the pastry base.

In Israel, the gold standard is the one made with Nabulsi cheese—a semi-hard brined white cheese that melts like mozzarella. This cheese is the reason that knafeh is served warm, so you pull apart a nice stringy bite rather than a congealed cheese layer. 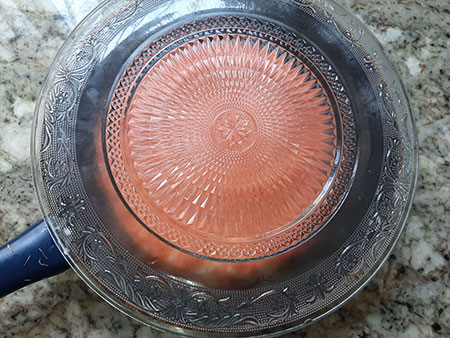 For my hacked knafeh, I didn’t use Nabulsi cheese. Instead, I chose an untraditional yet convenient mix of slightly salty full-fat cottage cheese and shredded mozzarella. I swear, it’s not as strange as it sounds, and this combo cooked up and reheated splendidly.

After trying out an oven-baked method, I settled on the stove top as the most authentic and tastiest path and delivers a crunch that the oven just can’t.

That said, if your heart can’t take all the flipping and transferring described in the recipe below, you can certainly follow the instructions for forming the knafeh, but do so in a 10-inch round cake pan, then bake in the oven at 425° for 35 minutes or so, covering it once the noodles brown. Then, you can remove your knafeh from the oven, top with syrup and eat it straight out of the pan—no flipping necessary.

The stove top version takes confidence, but there’s also not much to it: All you do is press down a layer of buttered noodles into the pan, spread the cheese mixture over the top, and press down another layer of buttery noodles on top to seal.

Inverting the knafeh onto a plate, and sliding it back down into the pan to cook on the second side, is the most challenging part. But even if you’re not a champion pancake flipper—I’m certainly not!—whatever you turn out is still going to look impressive and taste great.

Just remember to breathe and relax. You have warm knafeh on the way!