Most Saturday mornings in Israel, travel along any highway and you will encounter homemade signs using Sharpie-pen calligraphy to entice you to turn off the road for a jachnun pit stop. Indeed, the beloved slow-cooked Yemenite breakfast pastry is usually handmade by savtas and sold at family-owned booths along the road. And while this type of Middle Eastern cuisine is delicious and complex, the joke in Israel is that Yemenite Jewish food means carbs, carbs and more carbs. That jachnun now has been adopted by all Israelis as the basis for a leisurely shabbat brunch kind of upholds the punchline.

Jachnun’s dough is nearly identical to its pan-fried sister, malawach, which is baked into a round flaky pastry usually served with a savory meal. Where the two breads differ is in how the dough is manipulated and cooked: Jachnun—laminated with butter or, traditionally, ghee—is rolled up tight and packed into a pot for a low-heat, slow-cooking process.

Nestled into the pot alongside the slightly sweet, buttery dough, is a truly enchanting element: Uncooked eggs, shells and all, which will achieve a light brown color and accumulate toasty, caramel notes. The dough itself undergoes its own process of caramelization, entering the pot a pale tan and leaving the oven a deep golden brown. Eaten while warm, jachnun is dense and filling and has a soft middle, with sometimes crunchy bits and edges from exposure to the pot. Everyone has their own preference regarding which section they prefer, soft or crunchy.

The bread, soft of crunchy, is then enjoyed with those flavorful eggs, freshly grated tomato and an herbaceous Yemenite hot sauce called schug. (Omit the hot sauce if you dislike heat, I won’t judge!)

While most Israelis agree that jachnun is a real treat, it’s not the sort of bread that most below the age of 70 know how to bake from scratch. If the craving strikes, younger Israelis will probably set out on an early Saturday morning drive to find a roadside booth; or, they might pick up frozen, pre-made jachnun at the grocery store, which gets its buttery flavor and flakiness from margarine so that it will be pareve. Frozen jachnun is still baked in the oven overnight, but the only prep it entails is opening a package.

Since my recipe for jachnun makes an enormous batch, it’s a good candidate for packing up and dropping off with family and friends. It also freezes well: To do so, follow the recipe all the way up until the cooking step, then instead of layering all the rolled-up jachnun into the pot, keep a handful of rolls outside to flash freeze, then keep frozen in an airtight container for when you are ready to bake.

Who knows, maybe jachnun is the next challah-, sourdough-, bagel-pandemic craze for home-bound bakers? In fact, over the last few months, jachnun has gained buzz in the Netherlands thanks to the arrival of newly unemployed Israeli chefs looking for a way to make some quick cash.

Now it’s your turn to try your hand at jachnun—and don’t forget to take a photo and share it on social media! 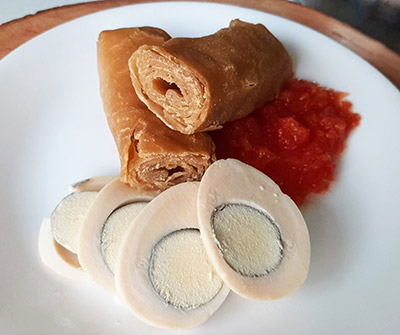