When Marcia Friedman found Judaism by way of love over two decades ago, she was as delighted by the cultural values she discovered as she was intrigued by the new foods she encountered in the Jewish kitchen after her conversion.

Friedman’s journey inward to discover the culinary synergy between her Italian American heritage and her newly adopted Jewish one resulted in her first cookbook, Meatballs and Matzah Balls: Recipes and Reflections from a Jewish and Italian Life, released in 2013. (Find Friedman online at meatballsandmatzahballs.com.)

Now, she’s out with her second cookbook, The Essential Jewish Cookbook: 100 Easy Recipes for the Modern Jewish Kitchen, a user-friendly introduction to Jewish food culture and history spanning a host of different traditions—from Ashkenazi to Sephardi to Ethiopian.

“I’ve never stopped learning and delighting in the hidden gems of Jewish food stories,” said Friedman, a Hadassah member, who with her family belongs to a Conservative synagogue near Washington, D.C. “It was a great pleasure to collect and illuminate them in [this cookbook].”

Did you know, for example, that the eggplant was once revered as the “Jewish apple” in medieval Europe? Or that Jewish bakers were among the first in Europe to cook with chocolate? Or that cheese-based latkes reigned supreme until the 1800s? These insights that Friedman peppers throughout her text lend a richness to the historical overviews and the recipes themselves.

The Essential Jewish Cookbook is a comprehensive collection that even includes a few dishes that Friedman was unaware, until recently, had Jewish roots. According to Freidman, pasta salad evolved as a clever Italian-Jewish invention meant to make cold pasta more palatable on Shabbat. She also shared that the famous Old Bay seasoning, which she uses in a fried fish recipe in the book, was invented by Gustav Brunn, a German-Jewish immigrant to America.

“Putting the fish and the Old Bay together was delightfully delicious,” Friedman said, “but also nicely representative of the story of Jewish migration and reinvention.”

Recipes that sound too good not to make range from salty and savory to sweet: Matza Brei with Dill and Lox; Chocolate Egg Cream Sodas; Sephardi Style Roast Lamb Shoulder; Wine Poached Gefilte Fish; and her Mandelbrot, in which Friedman grates marzipan into the cookie batter to amplify the almond flavor.

Unfortunately, there aren’t many photos to help illustrate the recipes, which is frankly a handicap for the home chef striving to ace Friedman’s thoughtful dishes. Though when it comes to Ashkenazi icons like challah, brisket and latkes, a dearth of photos shouldn’t be especially problematic.

Learn and marvel at the stories of these 100 Jewish recipes yourself, starting with the staples included here: Matzah Ball Soup featuring Friedman’s “floaters” and, for the upcoming holiday of Shavuot, which begins the evening of May 16, a classic American-style cheesecake. Friedman’s take on the ultimate dairy dessert for the holiday combines cream cheese with sour cream and uses a graham cracker crust. 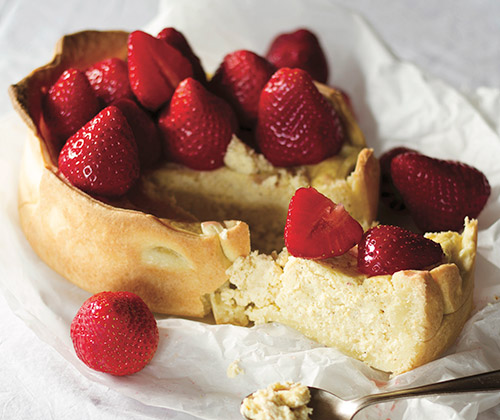 When cream cheese was invented in New York in 1872, Jewish bakers used it on more than just bagels. It made flakier pastry dough and became a substitute (with sour cream) for cottage cheese previously used in cheesecake. Thus, New York-style cheesecake was born. Cheesecake wows crowds year-round, but is especially welcomed for dairy-centric holidays like Hanukkah and Shavuot. This super-creamy version pairs beautifully with fruit.

TO MAKE THE CRUST

TO MAKE THE FILLING

VARIATION TIP: For a slightly nutty flavor, add 1/4 cup chopped pecans and an additional tablespoon of melted butter to the crust before pressing in the pan. 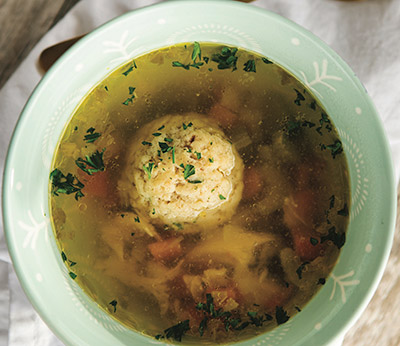 The matzah ball is an icon of Jewish cooking, but it has humble beginnings—it emerged when Ashkenazi cooks used matzah meal instead of flour to make kosher-for-Passover dumplings (knaidlach). Today, matzah ball soup plays a starring role at many Passover feasts and year-round at Jewish delis as an ultimate comfort food. Using schmaltz (chicken fat) is traditional, but olive oil works beautifully— and is healthier—for this fluffy-but-still-ﬁrm recipe.