All I really need to be satisfied at a holiday meal are appetizers: chicken soup (usually with matzah balls) and a good schmear of chopped liver on some sort of bread. I love chopped liver—a staple of many Rosh Hashanah tables—so much that I even eat it for breakfast, a rare preference for something savory when typically I’m known for my insatiable sweet tooth.

Matzah ball soup and chopped liver would probably be my last meal on Earth if I ever had to choose. However, my vegetarian husband would beg to differ. Once he started eschewing meat five years ago, I realized that I would have to eventually make a version of chopped liver that he could enjoy, too. It took me all of five years, but I finally buckled down to work out the formula for a vegetarian version this year.

The last 12 months have brought more changes than just my determination to master mock chopped liver. I became the proud owner of a now-beloved pasta machine, and so I also vowed this Rosh Hashanah to learn how to make delicious, chicken-filled kreplach for my homemade chicken soup. Yes, I will be swapping out my preferred matzah balls to try something new. After all, isn’t the new year a time for fresh beginnings?

At my holiday gathering, I want to pay tribute to the traditional brisket entrée served by Ashkenazi Jews in America—and what I grew up eating—that my Israeli family has, quite frankly, never understood. My fusion solution? Brisket bourekas. They hearken back to both brisket and knishes, yet come wrapped in savory boureka pastry that my kids (and extended Israeli family) already know and love. Are the bourekas authentically Israeli? Are they Jewish American Ashkenazi? All I can say for sure is that they are delicious, and a welcome replacement for a thick slab of brisket on many Rosh Hashanah tables. Shanah Tovah to you and yours, and happy holiday hosting! 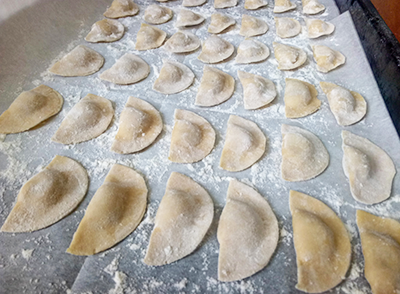 Taking a good deal of time and care to assemble doesn’t mean you should shy away from making classic kreplachs. Instead, see it as an excuse to recruit friends and family to help you in a holiday food-prep session. This is a great recipe to cook in advance, arranging the kreplach spaced out evenly on a tray and freezing, then storing in a plastic container in the freezer until Rosh Hashanah dinner. 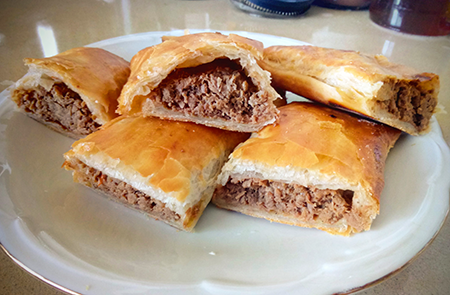 I have a nostalgic pull toward ground-meat knishes in thin pastry crust, but often find the ground meat in Israel to be disappointing. Imagine how thrilled I was to discover that using shredded, slow-cooked and cooled meat instead of ground makes for a delicious pastry filling? Although not traditional, frozen puff pastry gets the job done and makes these appetizers more boureka-like than knish-like. Use pareve pastry dough to make these kosher. 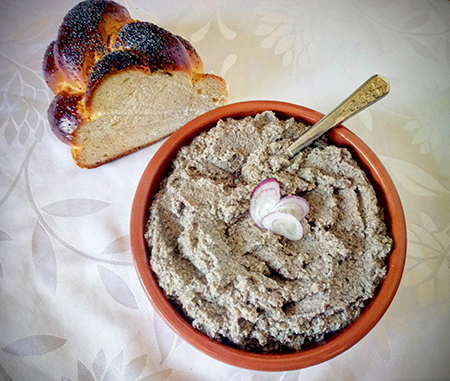 Before my husband became a vegetarian, we loved to order liver pâté in restaurants. We even begged our wedding caterer to add it to our celebration menu. In the spirit of a restaurant pâté, rather than a chopped liver, I suggest pairing this with homemade or store-bought onion or fig jam. Those jam flavors bring out a slightly bitter walnut aftertaste, making it practically indistinguishable from the real thing. Try serving it to your guests, and see if anyone even notices that it’s meat free!