One of the first things I learned to cook in my early 20s was Turkish Red Lentil Soup. I was inspired to master the dish while on a vacation to Turkey—a side trip during my studies abroad in Israel at Ben Gurion University in Beersheba.

A year later, after graduating and moving to Israel, I had only a few recipes under my belt: lasagna, my mother’s meatloaf, chicken schnitzel and this lentil soup, which I used to woo my husband while we were dating. Cooking the soup on a hot plate, which sat on an oddly shaped blue desk in my studio apartment overlooking Rabin Square in central Tel Aviv, I remember it made that little place smell like an actual home.

I’m not a huge fan of brown or green lentils, but red lentils, which are actually orange in hue, are a different breed entirely. Unlike other lentils, they grow soft and break apart to form a soft porridge when cooked, and are much less strong in flavor.

When traveling, I noticed that this soup was on the menu in Turkey nearly everywhere I went—Including in Izmir, the coastal city with a large Jewish population where I enjoyed matzah pizza. Limited by a strict budget and what I was convinced for many years was an allergy to milk, I ate it a lot while in Turkey. And while it may have been one of the cheaper menu items, its rich complexity of flavor was astounding.

Soups call for a layering of flavors. In this one, mild lentils are paired with herbs, creamy potato and zingy lemon, making the finished product mild, rich and surprisingly meaty in taste—all at the same time. It gets even better when garnished with more lemon juice just before eating, and when accompanied by a pale lager, like the Turkish beer I always ordered alongside my meal. Deglaze your pan with the same beer you plan on serving, or use water or chicken stock in place of the beer if you wish. 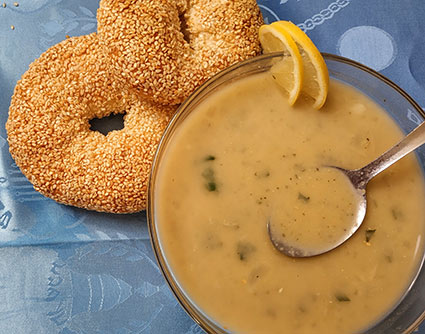