‘Eating Out Loud’ With Eden Grinshpan

As host of Canada’s Top Chef television program, Eden Grinshpan is known for doling out brutally honest critiques to contestants—and belting out, “Hand up, tools down!”

Grinshpan, 34, is also a food personality and chef in her own rite, going well beyond her hosting duties. (Check out Eden Eats, which she co-created and starred in for the Cooking Channel). With her Israeli ancestry, she admits to being cuckoo for tahini and fiery hot schug, of which she keeps two different versions in her fridge at all times. Now, in her debut cookbook, Eating Out Loud: Bold Middle Eastern Flavors for All Day, Every Day

Growing up in Toronto with Israeli parents, she spent the summers back in Israel. After graduating from Le Cordon Bleu cooking school, she went on a global trek through Asia, ending up in Israel, where she cemented her love and focus on foods of the Levant. Indeed, she became so taken with this moment in modern Israeli/Middle Eastern cuisine that she opened an Israeli-themed restaurant in Manhattan in 2018, called Dez (which has since closed).

“I’ve spent so much time in Israel,” she told me, “and would always crave the hummus, shawarma, falafel, kebabs, mezzes…all those flavors when I would get home, so I made it a point to explore and come up with my own version of those classics.”

However, if you’re looking for a super traditional shawarma recipe, you won’t find it in Eating Out Loud—and that’s deliciously O.K. Instead, Grinshpan peppers the book with recipes that use the classics as a jumping off point toward their final destination, which is mostly an interpretation of modern Israeli cuisine integrated with global flavors.

You won’t be disappointed with recipes like Aleppo Pepper and Orange Roasted Fennel; Sesame Schnitzel Sandwich With Harissa Honey and Tartar Slaw; Lamb Flatbread With Pomegranate and Mint; and Brown Butter Couscous With Cinnamon.

One potential controversy: An Israeli faux-pas can be found in the sunchoke hummus (don’t worry, Grinshpan includes a more traditional recipe in the book as well). While Israelis are creative about changing up hummus toppings, they remain adamant about never touching the base flavor of chickpeas. I decided to overlook the sunchoke hummus when I came across Grinshpan’s equally untraditional but ridiculously tasty summer fatoush salad, which calls for fresh juicy peaches and fresh mint to spruce up the usual tomatoes and toasted pita bread.

Grinshpan subtitles her book “Bold Middle Eastern Flavors for All Day, Every Day,” but she also infuses a little of her Toronto upbringing in the recipes. One of the most diverse food cities in North America, Toronto’s influence can be found in her multicultural creations such as Barberry-Studded Persian Rice Tahdig and the Turkish Lavash bread her father challenged her to try as a child.

In the book are recipes to feed a crowd, but also ones meant to be eaten standing over the sink, as Grinshpan admits to doing now and again as a busy working mom of one. And a whole chapter on recipes with well-balanced vegetable dishes has an Ottolenghi-esque feel of simple extravagance. Of note, check out her Roasted Cauliflower With Date and Parsley Gremolata, which Grinshpan tells me is inspired by a dish she served at Dez.

She dedicates section to her love of egg dishes (check out her Spring Frittata, a recipe she shared with Adeena Sussman earlier this year), and she doesn’t let you forget about sauces, which she deems “essential.”

And then there are Middle Eastern condiments. With the ability to be downright transformative, tahini is one of the dominant flavors Grinshpan reaches for again and again. Just test out her Tahini-dressed Caesar salad to see what a real creative mind can accomplish when all the stuffy food “rules” go out the window.

Here, we’re lucky to be able to share with you a peak into Grinshpan’s world of modern Israeli flavors with her Sumac Roasted Whole Snapper for two and Tahini Sheet Cake. 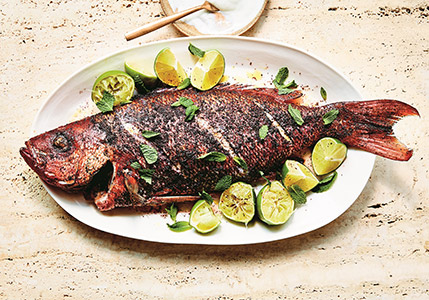 I’ve been obsessed with Persian cuisine for most of my adult life, reading tons of books on the topic and, obviously, eating all the food there is to eat. One combination that comes up again and again is sumac, lime and yogurt. This whole roasted fish recipe is the perfect place to put that trinity to work. When you smother the fish in sumac—literally packing it into the skin like you’re giving it a clay mask—it forms a crisp crust while infusing the fish with its unique floral acidity. 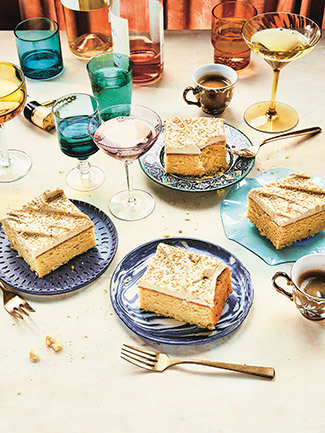 When you get on the tahini train, it’s hard not trying to find a way to use it in every recipe you make. Lucky for us, when it comes to dessert, it’s a natural fit. I tried whipping it into a buttercream and the result is In. Sane. It adds creamy body while tempering the richness of the frosting, and the lemon-scented cake brightens the pairing. You’ve probably had a million sheet cakes before, but never one like this.

NOTE You can make the frosting up to 2 days in advance and store it in the fridge. Just be sure to let the frosting sit at room temp for about 20 minutes to soften before spreading it over the cake.