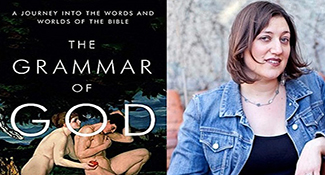 The Grammar of God, a Review
by Joseph Lowin
Aviya Kushner has written a work of popular scholarship that has a point or two to make about what the Bible has come to mean to English speakers.

Gesundheit, To Health in Hebrew
by Joseph Lowin
Leave it to Hebrew to have two ways of saying 'gesundheit.'

Much Ado About Doing
by Joseph Lowin
Jean-Paul Sartre, in his existentialist play No Exit, posits that what you have actually done—not what you have been—is what defines your life. In Hebrew,

Turn It and Turn It
by Joseph Lowin
According to humorist Ephraim Kishon, when Israelis are asked לַעֲמד‭ ‬בַּתּר (la-amod ba-tor), to stand in line, there are always a “privileged few” who consider 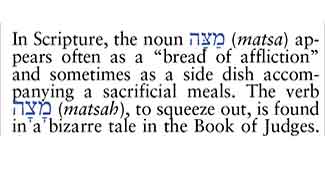 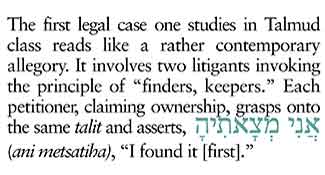 Finders, Keepers
by Joseph Lowin
The first legal case one studies in Talmud class reads like a rather contemporary allegory. It involves two litigants invoking the principle of “finders, keepers.” Each petitioner, claiming… 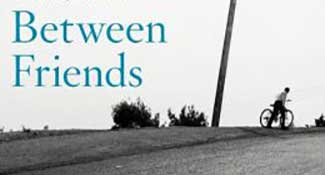 Between Friends
by Joseph Lowin
Between Friends By Amos Oz. Translated by Sondra Silverston. (Mariner Books, 179 pp. $14.95 paper) The New York Times reported recently on a trend in literary fiction: 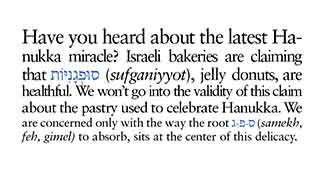 Soaking It Up
by Joseph Lowin
Have you heard about the latest Hanukka miracle? Some bakeries in Israel are claiming that  סוּפְגָנִיּוֹת (sufganiyyot), jelly donuts, are healthful. We won’t go into
Page 5 of 8« First«...34567...NEXT PAGE »Last »