PROTEST AGAINST ISRAELI FORCES ATTACK ON A HUMANITARIAN AID SHIP 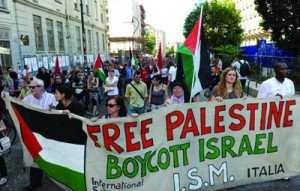 Image #: 10932318 epa02181645 Protesters march during a protest against the attack of Israeli forces on a humanitarian aid flotilla trying to reach Gaza territory, in Turin, Italy, 31 May 2010. Governments around the world condemned an early morning Israeli attack on a fleet of boats carrying 700 pro-Palestinian peace activists and 10,000 tons of humanitarian aid to the Gaza Strip, in which at least 10 people died. EPA/TONINO DI MARCO /Landov